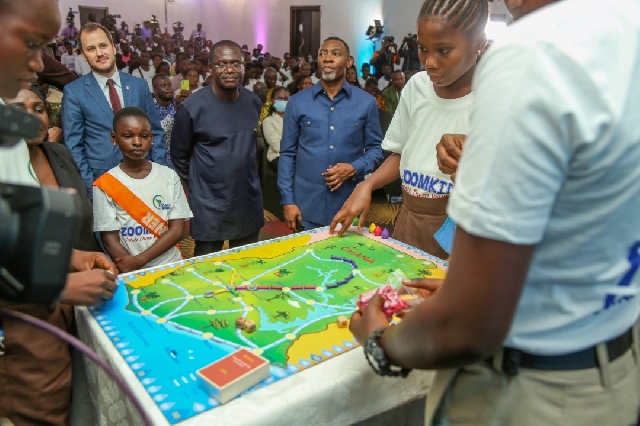 Waste management company, Zoomlion Ghana Limited, a subsidiary of the Jospong Group of Companies (JGC), has announced a $100,000 package to support schoolchildren at the basic level of education to learn more about sanitation and the need to protect the environment.

The Executive Chairman of the Jospong Group of Companies (JGC), Dr. Joseph Siaw Agyepong, who made the announcement, indicated that Zoomlion was also keen on sensitising schoolchildren to sanitation through its Zoomkids programme.

"The whole idea of Zoomkids was to catch the kids young and educate them on good sanitation practices as well as hygiene," he explained.

Dr Agyepong made the announcement at the launch of Waste Water Education organised by the Ministry of Sanitation and Water Resources (MSWR) in Accra on Thursday, 20 October 2022.

According to him, through Zoomkids, Zoomlion will inculcate a culture of sanitation and good hygiene into children.

He said since its inception in 2008, the Zoomlion Foundation can boast of about 526 Zoomkids in various schools in the country.

In 2016, he said, Zoomkids organised a quiz competition where a young girl emerged as the winner and was sponsored to Dubai to continue her education.

"The 2022 winner will be sent to Hungary for further studies," he disclosed.

Dr. Siaw Agyepong gave a firm assurance that Zoomlion will also continue to sponsor schools that have Zoomkids, with facilities to aid them in learning as well.

The Minister of Sanitation and Water Resources, Mrs Cecilia Abena Dapaah, cautioned farmers who farm on the banks of water bodies in the country, to put an end to such practice.

She said it contributes to polluting water bodies.

She reinforced that the fight against illegal mining  (galamsey) was a collective commitment, hence she urged Ghanaians to support President Nana Addo Dankwa Akufo-Addo on that front.

"We should all help fight against the few selfish people who want to destroy our water bodies and lands," she charged.

The galamsey war, she asserted, cannot be won without the support of Ghanaians.

According to Mrs. Dapaah, President Akufo-Addo has shown massive commitment in tackling sanitation, stating that the evidence was obvious for all to see, especially as the country has been recording zero cases of cholera and other sickness related to sanitation, for some time now.

Further, she maintained that her ministry was equally not relenting on its efforts to bringing an end to irresponsible mining across the country.

She stressed that it was crucial that "we start inculcating good sanitation practices and protection of our water bodies and environment into our children."

This, she pointed out, will sink deep into the minds of children to consciously and always protect the environment.

For his part, the Chief Executive Officer of Pureco Group, Mr Balint Horvath, stated that it was important for such programmes to be organised to protect Ghana's environment.

He lamented the damage galamsey was causing to Ghana's environment and water bodies.

“Pureco Group seeks to let children know the importance of sanitation and hygiene through games," he said.

"We want to bring a new way or alternative way of teaching in Ghanaian classrooms on sanitation and hygiene," he further added.

Mr Balint Horvath indicated that his outfit was in collaboration with Zoomlion to organise other projects aimed at helping the country to safeguard its environment.