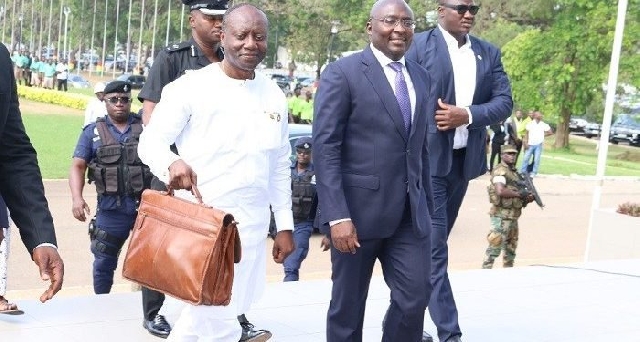 Dr Bawumia has been accompanying Ken Ofori-Atta at budget presentations

The Minority is raising some pertinent questions about the absence of Vice President Dr Mahamadu Bawumia during the presentation of the Thursday, November 24, 2023 budget statement to parliament by the Finance Minister, Ken Ofori-Atta.

"First of all, it has been a tradition in the house that anytime the budget is read, the Vice President sits in that chair there.

"Today the Vice president is conspicuously absent. It tells you that there is something wrong with the budget," the Minority observed.

What is the vice president running from, the Minority wondered, adding that the 2023 budget does not inspire hope.

The Ranking Member on Energy Mr Samuel Abu Jinapor raised questions about the vice president's absence on the floor of Parliament during the debate on the budget on Tuesday, November 29, 2022.

He asked: "Where is he (Dr Bawumia) running to? This tells us that this budget is not a budget of hope."

"Is it the case the that vice president who is touted as the economic whiz kid has distanced himself from the financial management activities in the country?" he queried again.

He also argued that: "Let me say that the resignation of the finance minister will be meaningless unless it is extended to the vice president and the Economic Management Team (EMT).

"Because if you dismiss the finance minister and leave the head of the EMT what would have been achieved? It will be meaningless."

He called on the president to clean the whole sheet and get the entire incompetent ones out and bring fresh blood to come and do the work.

Mr John Abu Jinapor said: "Let me doff my hat and salute 98 MPs on the other side who have shown that when it matters most, they will do what is needful."

He commended the 98 Majority-side MPs for being men of integrity in the matter of the resignation of the finance minister.

He noted that the government has spent more than it has earned.

According to him, every country goes through challenges but "I expected that what the president would do was show leadership but he only came to say 'Sika Mpe Dede'."

"Sika Mpe Dede [and] breaking the eight are not the options when the economy is in comatose," he stressed.