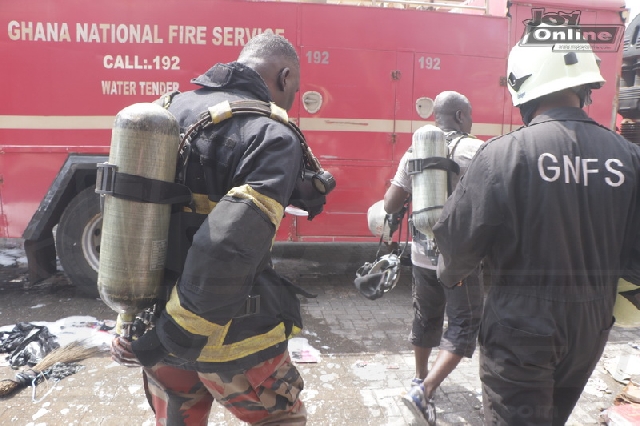 According to the residents, the firefighters failed to show up on time to salvage property

A team of firefighters deployed to a fire scene at Krofrom in the Kumasi metropolis of the Ashanti Region, on Tuesday, 9 November 2021, had to call for police protection to enable them to perform their duty, as residents of the area attempted to fight them off.

According to the residents, the firefighters failed to show up on time to salvage property razed by the fire.

The Fire Service, however, indicated that they showed up at the scene of the incident immediately after they were called.

Three rooms in a compound house, a refrigerator repair shop and a salon were all destroyed in the inferno, which began around 2.30 pm.

Narrating the incident to Class91.3FM’s Ashanti regional correspondent, Elisha Adarkwah, Technical Fire Station Officer, ADO1 Eric Mensah, revealed that the residents had tried to resist them from dousing the fire, so, they had to call for police protection.

He indicated that at about 2.41 pm, they received a call from their regional headquarters informing them about the fire in the area.

“We spent less than 10 minutes; we’re from Tech. When we came, this whole place was engulfed with fire”.

“Because some [residents] think we delayed, they tried to resist us. But we managed to put off the fire. Looking at the scene, we needed to call the police, so, we called police to come and protect us,” Mr Mensah said.

He further indicated that it was difficult accessing the affected houses due to a blockade caused by structures that were in their way.

“They said we delayed, they didn’t know we came from Tech, they were thinking we came from Manhyia, and most of them think that as soon as there’s a fire, within some seconds, we should be here. You, just imagine our road, the traffic on our road and coming from Tech”.

“The perception they have is, maybe we should fly and come and we’re worried, it’s not the best.”

He advised the general public against putting blockades in the way of unauthorised spaces, to allow easy access to places in case of emergency.

Mr Mensah stated: “Containers on pavements should not be tolerated. We’re in the dry season and we should be careful when there’s a fire, if you know you can’t put it out, as soon as you see the fire, just call the Fire Service, and we’re there, we’ll come.”

Some residents, however, insisted that the firefighters delayed showing up which led to the damage that was caused by the inferno.

“They [Fire Service] didn’t come early. They came after 40 minutes. There was pressure on them when they arrived because they came late, there are elderly people in the house too so it was scary. When they came, we were mad at them. When they came too, the water they brought was not enough, meanwhile, the fire was causing havoc.”

“We really helped them, one really annoyed us, he wanted to slap one of the boys, that’s what angered them,” a resident explained.