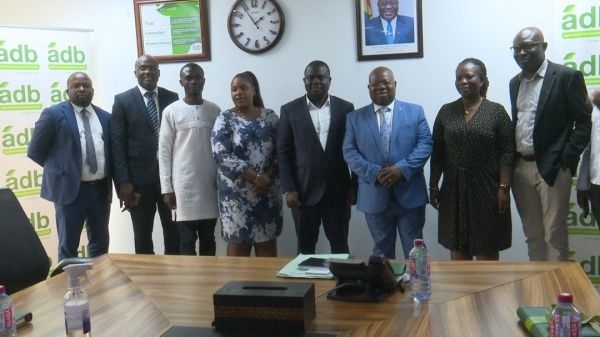 The Agricultural Development Bank (ADB) has assured the Ghana Journalists Association (GJA) of its support in rebranding the headquarters of the association.

The bank has also pledged its commitment to building the capacities of journalists across the country.

Addressing Executives of the GJA during a visit on Thursday, 15 September 2022, the Managing Director of the bank, John Kofi Mensah, reiterated the bank’s support for the GJA Awards scheduled to be held in November 2022.

The GJA executives visit forms part of plans to cooperate with key partner institutions to explore opportunities for development of the association as well as the various institutions.

President of the GJA, Albert Kwabena Dwumfour appealed to the bank to assist the association in its pursuit to rebrand the GJA’s headquarters; Accra International Press Centre.

He further appealed to the bank to aid the GJA build the capacities of journalists and boost its support for the upcoming GJA awards.

Mr Dwumfour commended the bank on its support for media.

He assured the bank of the association’s commitment towards the bank in the promotion of Agribusiness.

The Managing Director of the bank, on his part, acknowledged the role of the media in promoting Agribusiness and stressed on the importance of the development of the human capital of the media.

He also called for a stronger relationship between the bank and the GJA.

“We want to assure you that as it was, we are going to do the same and even more together with you so that we can move higher,” he added.