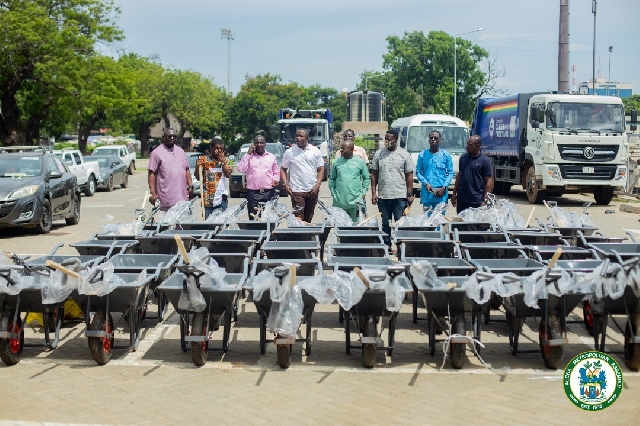 The Accra Metropolitan Assembly (AMA) has received sanitation tools from Base Pharmacy, importers of pharmaceutical products to support efforts to improve waste collection and keep the city clean.

Receiving the items on behalf of the Assembly, Presiding Member of the AMA, Alfred Asiedu Adjei expressed gratitude to Base Pharmacy for their support in ensuring that the city of Accra was rid of filth and called on other private institutions to emulate this gesture.

“I want to acknowledge Base Pharmacy for these items they have given us because not everyone would do what they have done today, and as such, I would like to say that on behalf of the first female Mayor of Accra and my fellow Assembly members we are grateful for this and we also hope that other institutions follow suit because cleaning Accra is not a one-man job,” he said.

Alfred Adjei, who is also the Assembly member for the Avenor electoral area, assured that the items were going to be used judiciously to undertake all sanitation-related activities in the respective electoral areas adding that they would be shared across all 20 electoral areas in the AMA.

“These items that we have received today are going to be shared across all 20 electoral areas, which means that every Assembly Member would receive a working tool,” he noted.

A Representative of Base Pharmacy Mr Korankye Ankrah, who presented the tools on behalf of the company in a remark noted that the support was in accordance with President Nana Addo Dankwa Akufo-Addo’s vision of making Accra the cleanest city in Africa.

“I think this is also a step to ensuring that the city of Accra becomes the cleanest city in Africa as is the vision of the President of the country and also as people, it is very relevant to live in a clean environment and as such Base Pharmacy upon following the activities of the Assembly in keeping Accra clean we had to proudly support this call by donating these items,” he said.

Mr. Ankrah also stressed the need for Assembly Members and city dwellers to support the AMA in cleaning the city of Accra, adding, working collectively as stakeholders would help to ensure that Accra was kept clean.

The AMA upon launching the #BorlaInDrainsMustStopNow campaign has so far prosecuted some 115 persons for flouting the Assembly’s bylaws on dumping of refuse and sanitation.