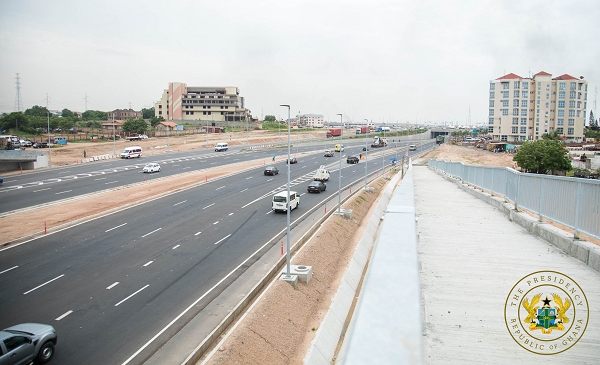 The Ministry of Roads and Highways has said allegations and conclusions by the National Democratic Congress (NDC) caucus in Parliament, with regard to the Accra-Tema Motorway expansion contract, “do not represent the accurate status of the contract.”

This follows assertions by the NDC in Parliament, at a press conference held on Wednesday, 13 January 2020, that the contract will only serve the interest of government officials.

The NDC caucus therefore proposed that the USD570 million contract which was signed between the Government of Ghana and Mota-Engil Engenharia E Construcao Africa S.A. be abrogated in order to protect the public purse.

Reacting to the NDC Parliamentary caucus’ concerns, in a statement issued by the Ministry on Friday, 15 January, 2020, the Roads and Highways Ministry stated that: “the assertions and conclusions made by the NDC caucus in Parliament do not represent the accurate status of the contract.”

The Ministry explained that: “After failed attempts by the previous NDC Government to procure the said works to other foreign Contractors, Government undertook a transparent and competitive process between 2017 and 2020, using Public Private Partnership (PPP) arrangements to select the Contractor.”

It continued that: “During the negotiations with the Contractor it emerged that the financial arrangements proposed by the Contractor were not favourable to Government hence the need to restructure the project as a Design and Build contract.

“Because of the sound technical design proposal, a decision was also taken to retain the same Contractor. Consequently, the Ministry of Roads and Highways (MRH) through the Ghana Highway Authority (GHA) rescoped the project and invited Mota-Engil to submit a sole bid proposal in line with the relevant clauses of the Public Procurement Law.”

It continued further that: “Mota-Engil’s bid was duly evaluated, negotiated and the statutory approvals were obtained from the Public Procurement Authority (PPA) and the Central Tender Review Committee (CTRC).  A commercial contract was signed on December 16, 2020” while “further approvals will be obtained from Cabinet and Parliament after the financing arrangements have been finalized.”

The Ministry also revealed that: “The project has been designed as a composite design and build project with complex traffic issues with over 60,000 vehicles per day and therefore cannot be sliced-packaged for only local contractors to undertake.

“The Contract has made strict provision for 40percent local content which implies that goods and services will be provided by local Contractors and businesses under the management of the Lead Contractor, Mota-Engil.”

It emphasised that: “At no stage during the procurement process were local contractors excluded from participation in the bidding.”

It also indicated that “Government through the Ministry of Roads and Highways is working in close collaboration with the Ministry of Finance and all the relevant procurement agencies to ensure that no mandate is side stepped in the interest of the nation and to obtain value for money.”

The Ministry therefore requested that, all stakeholders “support the project that is expected to benefit the entire country.”

Spokesperson for the NDC on Transport, Kwame Agbodza, had likened the contract to Ameri and other deals which he noted benefited only government officials.

Mr Agbodza said: “This is another scheme like Ameri and other deals to create an opportunity to serve themselves and we in the NDC caucus will not allow it. If you push this we will call for a parliamentary probe into this.

“We are asking the government to stop this process. It will take you about two extra months to do selective tendering and allow Ghanaian contractors to be able to participate in this so that we can have Ghanaian heroes in this. ”