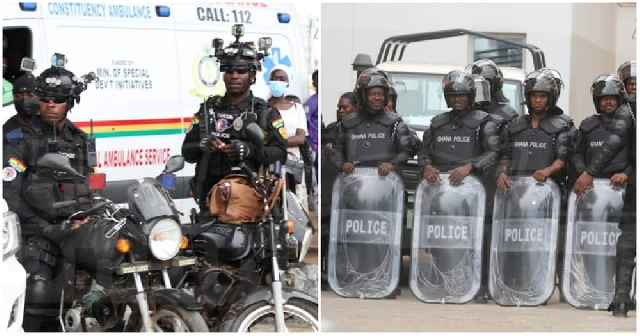 Some 12 police personnel were injured in the clash

The Chief of Party at the Bureau of Public Safety, Nana Yaw Akwada, has accused the Ghana Police Service of failing to provide tactical leadership in handling the chaotic Arise Ghana demonstrators.

The Ghana Police Service, on Tuesday, 28 June 2022, clashed with the Arise Ghana demonstrators following a disagreement on the choice of route.

Injuries were recorded on either side.

The demonstrators threw stones and other crude weapons at the police while the law enforcers also fought back with rubber bullets and tear gas.

Some 29 protesters have been arrested by the police, so far.

Speaking on Class News' 505 news programme with Abdul Kareem, Nana Yaw Akwada said: “People congregating to express their beliefs and ideas is a cornerstone of the social contract between citizens and the government”.

“It is a freedom closely guarded by our constitution and mechanisms through which much social change has been generated century after century”, he stated.

“It is very important that when events like this become violent and escalate in the manner that we have seen, we all show concern”.

“Listening to the narratives and the build-up to today, I think that the police has not risen to meet the challenge of our time”, he noted, adding: “This is where leadership comes and it has to be leadership on both sides”.

“But largely, we want to gravitate toward the angle of the law enforcement because they are the ones that the taxpayer spends his money on to maintain the peace”, he pointed out.

Nana Yaw Akwaada also questioned the tactical approach adopted by the Ghana Police Service prior to the commencement of the demonstration.

“It would have been important that having each of them coming on the scene with differences from the court, they should have been able to sit and agree on which way forward and when that agreement was not happening, one would expect the police to do a tactical evaluation of the route that these demonstrators are intending to take.

“I do not want to think that the police went there with one mind plugged that this is where people are going to go because that is not security”.

“In security, even when you are certain of a particular event, we still draw up plan ‘Aʼ, plan ‘Bʼ. So, are we supposed to take it that the Police Service, our men in uniform, went on that scene with just one single plan? And that, if the demonstrators decided that they were not going to go according to the plan, this was the measure they were going to take?” he quizzed.

“I think that it's important we begin to re-focus on our incident command system management. We need to focus a lot more on crisis communication and we need to let our police understand that modern policing is just not methodical, it is scientific.

“There are times you arrive at the scene and you need to make prudent, tactical decisions to protect lives and properties,” he added.

He further called on the leadership of the police to urgently engage leaders of Arise Ghana on the modalities for Day 2 of the pressure group's demonstrations.