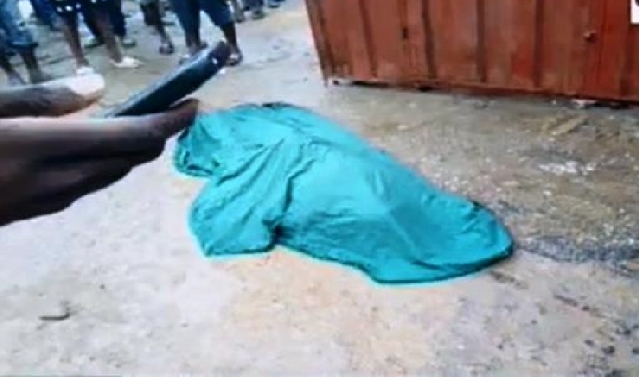 Body of a young man electrocuted

A 23-year-old man, Ebenezer Drah, was on Sunday night, 10 November 2019, electrocuted during a heavy downpour at Dome Crossing in Accra.

According to eyewitnesses, the deceased left the safety of his room to help a group of men salvage a kiosk that was being washed away by the floods from the rains when he got electrocuted.

Narrating the incident to ClassFMonline.com’s Elikem Adiku, an eyewitness, and a work colleague of the deceased who gave his name as Essilfie said: "During the rain, the deceased, whose room usually gets flooded when it rains, brought out his belongings after which he went to help a group of men to salvage a kiosk which was being washed away by the floods.

"While trying to help, Eben got electrocuted. The men could not continue because it was dangerous. If you take a look at him, you'll see that he is still holding onto the electricity lines."

The deceased was an employee of a pure water producing company, Agyenkwa at Dome.

As of the time of filing this report, eyewitnesses were waiting for the police to convey the body to the morgue.