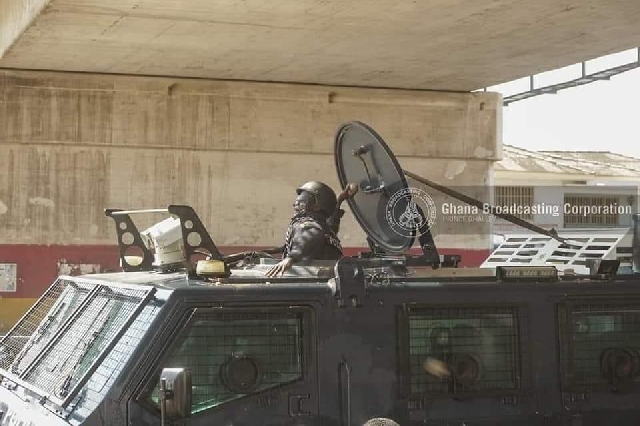 A police van at the demonstration scene

The Ghana Police Service has said its intelligence indicates that some Arise Ghana demonstrators are going around acquiring catapults with the intention of using them during Wednesday’s demonstration.

The police has, thus, cautioned the demonstrators who intend to foment trouble, to desist from such unlawful conduct, as it will take all the necessary professional measures to enforce the law and protect life and property.

Earlier, the law enforcement agency said it spotted a demonstrator, Mr Joshua Akamba, with a weapon among the crowd of demonstrators gathered around the El Wak Stadium.

According to the police, he was duly advised to put the weapon away after his attention was drawn to the illegality associated with such an act.

He was also urged to notify other demonstrators to desist from carrying offensive weapons during the demonstration.

Twenty-nine protestors were arrested when they clashed with the cops while 12 officers sustained injuries.

The police also fired tear gas into the protestors injuring an unspecified number of them.