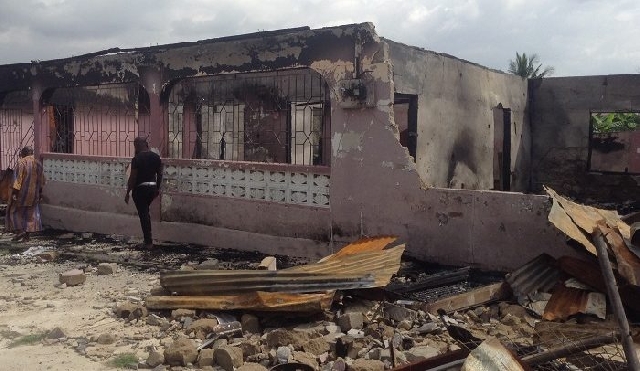 Remnants of the razed house

A ten-room compound house at New Abirem in the Birim North Constituency of the Eastern Region was razed by fire on Wednesday, 11 May 2022.

The fire, which started in the afternoon, destroyed the 10 rooms completely, displacing the occupants.

According to the residents, the fire service in the community was informed about the fire immediately after it started.

“The fire station is only a walking distance, yet the firemen walked here without their vehicles. They later informed us that their vehicle had broken down and, so, they called in firemen from Nkawkaw".

“Unfortunately, by the time they arrived, the fire had destroyed the building completely”.

“Everything is gone, nothing is left”, he complained.

Mr Tetteh said: “Some of the occupants, who were inside the house, including an ailing woman, were rescued by residents”.

“Though they tried to douse the fire, too, they could not,” he said.