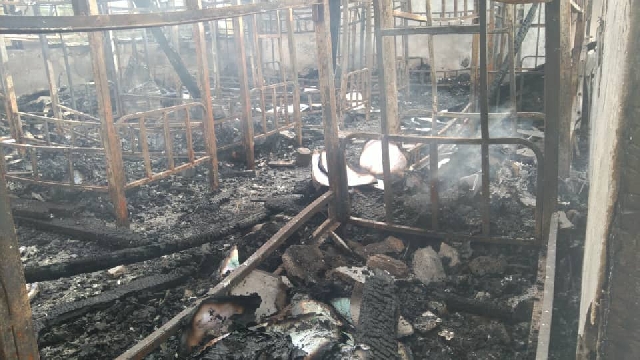 Fire devastated the boys' dormitory of the Koforidua Technical Institute

Some 75 students have been displaced after fire devastated the boys' dormitory of the Koforidua Technical Institute late Monday night.

The dorm in the New Juaben North Municipality school in the Eastern Region went up in flames at almost midnight.

The blaze destroyed four rooms before it was curtailed by fire officers from causing further harm.

Eight of the 75 occupants suffered minore injuries and were taken to the hospital for care.

Only one of them remains on admissio at the St. Josephs’s Hospital in Koforidua.

The cause of the inferno is not know as of now but fire experts suspect it could have been sparkes by an electrical fault.

The school authorities have appealed to the public for aid.

The Member of Parliament for the New Juaben North constituency, Nana Adjei Boateng, has donated GH¢20,000 to the school to mitigate the effects of the disaster.