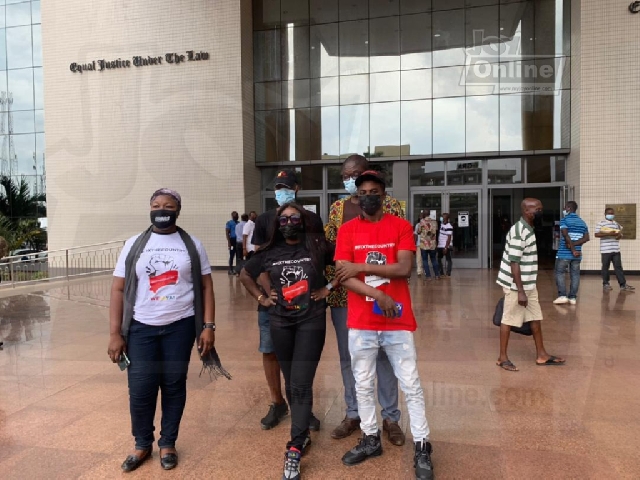 Some #FixTheCountry protestors spotted at the court complex

The leaders of the #FixTheCountry campaigners have threatened to take legal action against the Ghana Police Service for alleging manhandling and assaulting them on Friday, 4 June 2021.

The group, numbering about seven, thronged the court’s premises in solidarity with its members who had been billed to appear before the court.

The police, however, prevented them from entering the precincts of the court en masse.

This led to a clash between the campaigners and the police.

The Accra Regional Police Commander in charge of Operations, ACP Kwesi Ofori, told Class News that the action of his officers was to prevent disorder in the court premises.

“My commanders indicated that this is a court premises. People should not come en masse and that individually, they can come into the court. The police is here to provide adequate security for the court building and all the other courts therein.

“So, coming en masse with placards, flags and other paraphernalia may mar the beauty and ethics of the court.

“In view of this, my men on the ground decided, among other things [that] they [campaigners] could leave the flags and also limit that militancy and go into the court as individuals,” he explained.

Meanwhile, some of the #FixTheCountry protestors have hinted at filing charges against the police for harassment and assault.

They claimed they were pushed, shoved and prevented from taking videos of the confrontation between them and the police.