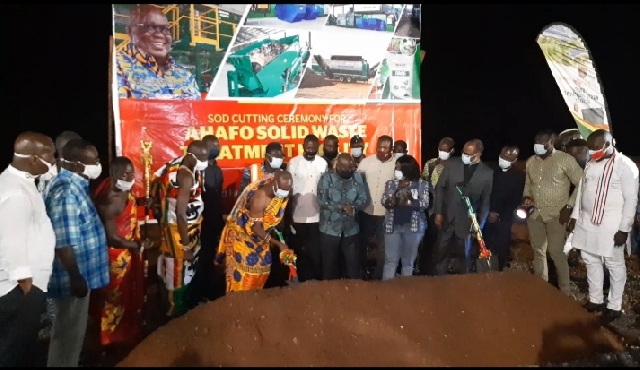 President Nana Akufo-Addo has reiterated his government’s resolve to support any good initiative through the public, private partnerships (PPP) that will inure to the benefit of Ghanaians.

The President made this statement during the sod-cutting ceremony for the construction of a solid waste treatment plant for the people of Ahafo.

President Akufo-Addo assured private companies of his government’s support, citing, as an example, the government’s collaboration with private waste management company, Zoomlion, to build solid and liquid waste facilities across the country.

He attributed most of the diseases recorded in the world to bad sanitation practices.

The President indicated that the move to build the solid waste plant in Ahafo was a demonstration of government’s promise to ensure that Ahafo Region has its fair share of the national cake.

The Minister of Sanitation and Water Resources, Cecilia Abena Dapaah, revealed that Ahafo alone generates over 380 tons of garbage daily, adding that the plant upon completion, will create direct and indirect employment for the people in the region.

She used the opportunity to commend Zoomlion and the Environmental Service Providers Association (ESPA) of Ghana for their contributions and support towards the President’s vision of making Ghana clean.

The Executive Chairman of Jospong Group of Companies (JGC), Dr Joseph Siaw-Agyepong, disclosed that the facility will receive waste from Bechem, Duayaw Nkwanta, Hwediem, Miam, Goaso and other satellite communities which he says, has been made possible due to the President's dream to make the country clean.