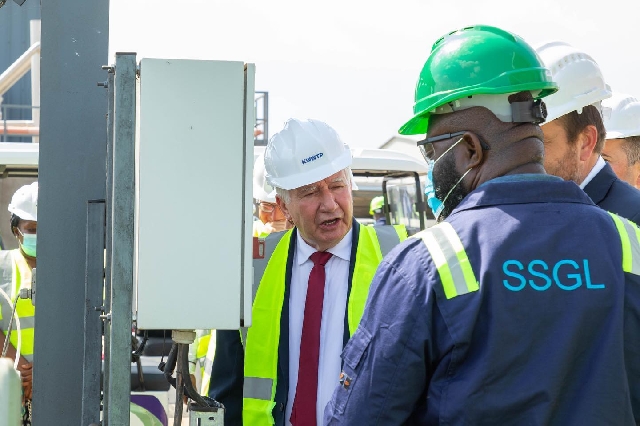 Istvan Jakab at the plant

Officials of the Hungarian government have paid a working visit to the Kumasi Composite and Recycling Plant Limited located at Bosomtwe in the Ashanti Region.

The delegation, which is made up of the 1st Deputy Speaker of Parliament for the Hungarian Government, the Hungarian Ambassador to Ghana and some other government officials, paid the visit to the plant.

The Hungarian government, in collaboration with the government of Ghana, together with private waste management company Zoomlion Ghana Limited, constructed the Kumasi Composite and Recycling Plant to help curb sanitation challenges in the Ashanti Region.

The 1st Deputy Speaker of Parliament for the Hungarian government, Istvan Jakab, speaking during the tour of the plant, expressed satisfaction with the work done to fight unsanitary conditions in the country.

Speaking to the media, the Hungarian Ambassador to Ghana, Tamas Endre Feher, also expressed the Hungarian government's commitment to supporting the government of Ghana in all development and improved sanitation in the country.

For his part, the Executive Chairman for the JOSPONG Group of Companies, Dr Joseph Siaw Agyepong, thanked the Hungarian government for the support of the project, which is being replicated in other regions.

He said the water waste treatment plant has so far created 60 direct jobs for the people in the Bosomtwe District.

The purpose was to seek avenues for further collaborations in academia, technology and also to introduce a new era of communication between Ghana and Hungary.