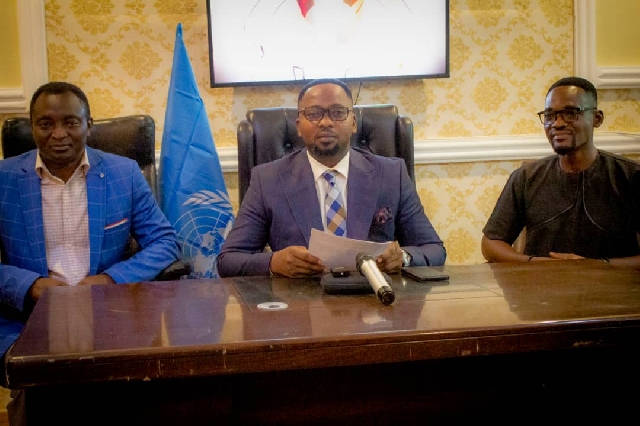 Members of the hate speech coalition

The International Association of World Peace Advocates (IAWPA) Ghana has called on Parliament to pass a bill against hate speech.

The group launched a coalition to spearhead the campaign.

Addressing a press conference on Thursday, 3 June 2021, the Chairman of the coalition, Dr Sam Owusu, who doubles as the Country Director of IAWPA, stated that the vision of the coalition is to bring like-minded people to campaign against hate speech and promote respect and decorum in addressing grievances and sharing opinions.

He said a free press is the cornerstone of a democratic society, it is important to protect it.

The coalition stated that the liberties enjoyed by Ghanaians depend also on the freedom of the press.

“However, when these freedoms and rights are left unrestricted or without borders, there are likely to be abused. The exercise of this freedom of expression carries with it special duties and responsibilities,” the statement noted.

Dr Owusu acknowledged that it is enshrined in the 1992 Constitution that all persons shall have the right to freedom of speech and expression, which shall include freedom of the press and other media, adding that “the only time that this right may be revoked is when it is used by an individual to threaten, vilify, insult and malign other individuals”.

According to him, in the last couple of years, the Ghanaian media space has been inundated with an expression that borders on slander, defamation, and obscenity.

The Coalition Against Hate Speech is, therefore, calling on all Ghanaians to avoid the use of hate speech while expressing their concerns and opinions.

“While we encourage the need to criticise and raise issues affecting the development of our country, we urge that use of hate speech should be avoided”.

“We call on all well-meaning Ghanaians to join the coalition to help rescue Ghana from the use of indecent and intemperate language in the social media to help in restoring the culture of dignity and respect Ghanaians are noted for. In the coming days, the coalition will seek audience with opinion leaders around the country to discuss how hate speech can be addressed in Ghana”.

“The coalition is also advocating for Bill to be passed by the parliament of Ghana to prohibit the use, production, publishing, distribution, presentation, or direction of the performance of any audio, visual or written material which is threatening, abusive or insulting or involves the use of such words, in order to stir hatred, is likely to be stirred up against any person in Ghana,” the group further noted.