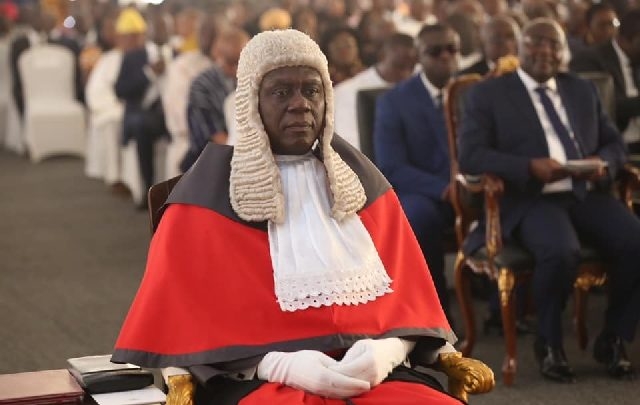 The allegation was made by Kumasi-based lawyer Kwasi Afrifa.

Speaking to EIB’s court correspondent Murtala Inusah, however, Mr Nartey urged all staff of the Judicial Service to go about their normal business since the CJ will come out unscathed in the matter.

According to him, it is impossible for Justice Anin Yeboah “to demand or take any bribe, adding: “We, as Judicial Service staff, have worked with him closely at various levels: as clerks, at administrative and management levels, and we know the kind of person Justice Anin Yeboah is”.

“He has an impeccable integrity and has a high standard moral character”, Mr Nartey asserted.

The JUSSAG president insisted: “The ethical standards with which he goes about his work that we know, we are disputing this; we can’t believe it. It is impossible with him”, saying: “I believe the lawyer who made that allegation himself knows very well that what he said cannot be true”.

“And, so, I will urge and entreat Ghanaians not to place any premium on this allegation made against the Chief Justice,” Mr Nartey added.

“We are worried to the extent that an innocent man is being pulled into an unfortunate situation; that is the only worry we have”, Mr Nartey noted, but added: “we take consolation from the fact that we know the man and he is of integrity”.

“We are happy work is going on and we know that at the end of the day, people who are happy about it will be proven wrong, so, we are not perturbed at all, we know that our Chief Justice is a man of integrity, and will not be involved in any such thing.”

Mr Nartey also said he would not rule out political motivation behind the allegation.

“I will not be surprised if it has a political undertone because Ghana seems to be now moving by political sentiments but, unfortunately, most of these sentiments born out of politics are not premised on the truth, they are only emotional and propaganda and, so, yes, people can always do their politics but the truth will always prevail and that is what we are happy with”, he note.

Mr Nartey also argued against calls on the CJ to step aside for investigations as demanded by the main opposition National Democratic Congress (NDC).

“It is early days yet to say the Chief Justice should step aside just because this flimsy allegation has been made,” he argued, noting: “The lawyer himself knows that he ought not to have made that remarks and it humiliates him the more.

In Mr Nartey’s view, “investigations cannot lead to any other outcome than the fact that the allegation is baseless and so that is what we look forward for.”