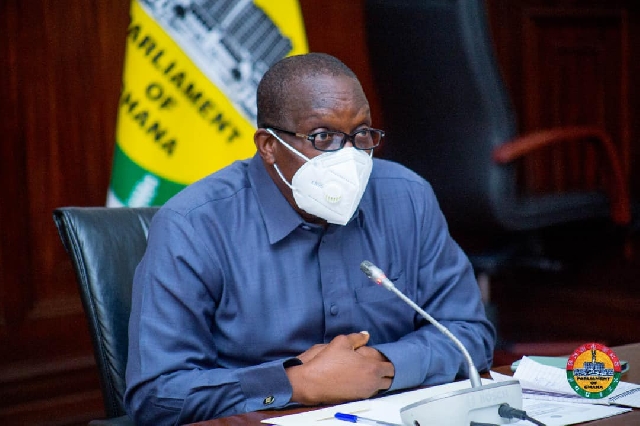 The Police had attempted to arrest the MP for allegedly leading his constituents to block some roads during a protest over poor roads in the Madina constituency.

The youth resisted and prevented the Police from arresting their MP.

In the course of the melee, Inspector Agbavor is alleged to have whisked the MP away in his car.

He is alleged to have recklessly driven into a crowd after the protest on Monday, 25, October 2021, in the Madina constituency, directly endangering the lives of two senior officers and other civilians.

The Police in a statement signed by ACP Kwesi Ofori, Director-General, Public Affairs said the Parliamentary Protection Unit has been tasked to assign a new guard to the MP.

But reacting to this directive, Mr Bagbin cautioned the police saying “the Police Service should also not be allowed to use threats of administrative sanctions to make ineffective the Parliamentary Protection Unit by interdicting officers who are lawfully protecting their Principals and whose only crime, if any, is to be assigned to protect a Member of Parliament.”

He added that “this undoubtedly will defeat the very purpose for which Members of Parliament are provided with bodyguards in the first place.

“The instruction to the Commander of the Parliamentary Protection Unit to replace the interdicted Police Officer with another officer for the Hon. Member is to say the least, dangerous and unacceptable.”

Meanwhile, Mr Bagbin has told the Ghana Police Service that to arrester a sitting MP, the appropriate procedure is to secure from the Speaker, a certificate that the MP in question is not attending to Parliamentary business.

He noted that anything short of this will not be entertained by Parliament.

Mr Bagbin stated that the immunities and privileges of MPs are not absolute but the procedure for causing the arrest of a sitting MP must be in accordance with the constitution.

Mr Bagbin said this in a statement to react to attempts by the Ghana Police Service to arrest Mr Xavier-Sosu.

The Police have invited the MP on several occasions for questioning but he has declined citing parliamentary privileges.