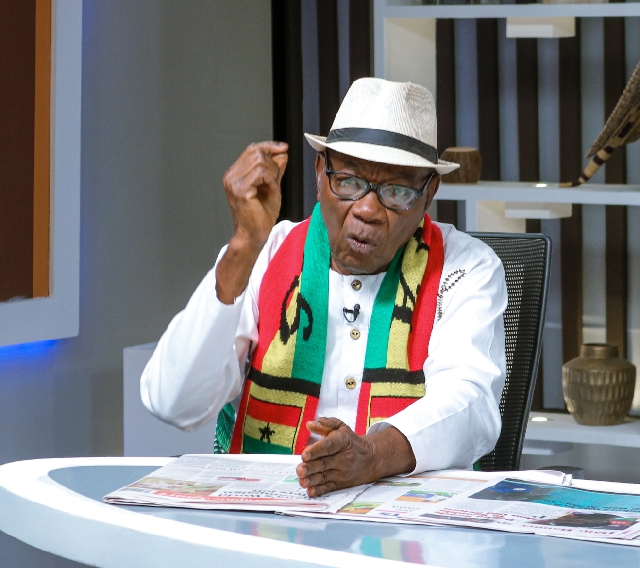 Ghanaians must be united in the quest for food sufficiency through the revived Operation Feed Yourself campaign being championed by the Class Media Group (CMG), retired serviceman Joel Sowu has noted.

“The first port of call is unity – the ability to galvanise everybody in this country to know that we want to feed ourselves”, Captain Sowu (retired) told the Class Morning Show, stressing: “That is important”.

“In Acheampong’s period, what Acheampong did was he took pragmatic steps to ensure we are all galvanised together to be able to meet the aim: to produce enough food for the country and export the rest”, he noted.

In 2020, food insecurity worsened in Ghana, according to the 2020 Comprehensive Food Security and Vulnerability Analysis (CFSVA).

The report was implemented by the Ghana Statistical Service (GSS) in collaboration with the Ministry of Food and Agriculture (MOFA).

It had financial and technical assistance from the World Food Programme and the Food and Agricultural Organization of the United Nations.

Since then, the COVID-19 pandemic and the Russia-Ukraine war have worsened the situation, as prices of food keep skyrocketing in Ghanaian markets – a situation that necessitated President Nana Akufo-Addo, in his Sunday, 30 October 2022 national address on the prevailing economic crisis, to appeal to traders and market women, to stop taking advantage of the situation for profit-seeking.

Also, the Ministry of Food and Agriculture intervened by carting loads of foodstuff from farm gates in the Western Region to its head office in the national capital, Accra, to sell to Ghanaians at low prices.

This was an attempt by the government to indirectly control the prices of food which keep rising every day.

Realising the inherent threat food insecurity poses to Ghana’s democracy, Class91.3FM, one of the several media houses belonging to the Class Media Group (CMG), has decided to use its breakfast show, the Class Morning Show (CMS), to resurrect the Late General Kutu Acheampong’s five-decade-old Operation Feed Yourself (OFY) scheme.

The CMS-OFY aims to encourage the audience of CMG to produce their own food to reduce overdependence on foreign imports and attain national food self-reliance.

The initiative will be supported by the Group’s eight other radio stations (Accra FM, No.1 FM, Kumasi FM, Adehyee FM, Sunyani FM, Dagbon FM, Ho FM and Taadi FM) and one TV station (CTV), across the country and would pep up Ghanaians to start backyard and smallholder farms so as to produce their own food, as a means of mitigating the current economic crisis that has caused the prices of food to skyrocket on the market.

Gen. Acheampong’s Operation Feed Yourself was an agricultural programme administered while he was the head of state.

It was started in February 1972 and remained until the end of his regime in 1978.

It aimed at self-sufficiency by increasing the volume and diversity of agriculture intended for domestic consumption in Ghana.

Leading the revived initiative by example, CMG has started its own farm under its newly created agriculture unit.

The new business enterprise is into full-time large-scale crop farming and animal husbandry.

CMG intends to use its farm to inspire and demonstrate to Ghanaians, how a private organisation, through determination, can rally its own resources to produce enough food for self-sufficiency.

The Ambassador for CMG’s Operation Feed Yourself initiative, Brigadier General Nunoo-Mensah, a former Chief of Defence Staff, is billed to launch the initiative in the coming days.

Ahead of the launch, Gen. Nunoo-Mensah was in the studios of Class91.3FM for a conversation on the breakfast show with host Kofi Oppong Asamoah.

The retired army officer recounted how his father, a farmer, introduced him to farming at a very young age, and, “so, when Ghana sits here and we are getting hungry today [and] we are asking people to come and feed us, [it baffles me]. Go to the supermarkets, 95 per cent of the foods there are all imported; it doesn’t make sense whatsoever”.

He said: “Ghanaians should wake up because when you get hungry, there would be big trouble for us; and hunger is coming, so, we should wake up”.

Referencing General Acheampong’s initiative to buttress the need for self-sufficiency in food production, the 86-year-old retired army man said when the late head of state came to power in 1972, 50 years ago, though he (Acheampong) was an elderly soldier, “what he did after Nkrumah, nobody has been able to do that”.

Gen. Nunoo-Mensah recalled that when the International Monetary Fund (IMF) and the World Bank “refused to give him [Acheampong] a loan”, he said: “No bloody fears; feed yourselves”.

“I had a backyard garden at Soul Clinic, Old Quarry Site …” he recounted.

He said when Gen. Acheampong came to power, “he planned this Operation Feed Yourself to start on January 13, 1972” and “by April, we were farming; I had a poultry farm”.

Contrasting Operation Feed Yourself to the current government’s Planting for Food and Jobs programme, Gen Nunoo-Mensah asked: “… Where’s the food?” adding: “In Acheampong’s time, from Weija all the way to Winneba, you see farms on your left and right”.

“We were serious”, he noted, indicating: “Acheampong himself had a farm within Burma Camp to prove that he was involved” but wondered: “How many ministers have farms? How many of them go to the farm to farm? And we are hungry”.

“What we should do now”, in his view, “is to make agriculture key to our development because a hungry man is an angry man”.

“… What we should be doing is to launch this agricultural revolution [CMG’s Operation Feed Yourself]; not with guns but with tractors, fertilizers, cutlasses and everybody in this country should be involved”, he urged.

Gen. Nunoo-Mensah explained: “When I say everybody, I mean anybody who eats. Who should cook to feed you? Who should grow food for you to eat? If Ukraine doesn’t send wheat and you can’t get bread – look at the price of food today – you can make cassava bread; cassava grows anywhere”.

Gen. Nunoo-Mensah urged CMG to put together a blueprint for the initiative with the buy-in and participation of the government.

“So, let’s get a small team to sit down, and the government should be involved. We want to feed Ghana. We should start now. The rains are almost over, so, we can’t do much but there’s something we can do: there are water bodies which Acheampong built – the Weija Dam, the Akyerako Dam, Tono Dam, Via Dam, Dawhenya Dam. The Chinese are growing rice in Dawhenya Dam and Ghanaians are shouting on the road there, ‘trotro, trotro’; what a bunch of lazy people! If at 86, I’m working, young men are on the road shouting ‘trotro, trotro’ and the Chinese are growing rice; who should grow the rice for us to eat?” he wondered.

Gen. Nunoo-Mensah said he fully supports CMG’s initiative, saying: “I know that Class FM is beginning a programme and I want to put my weight behind that programme and what we should be doing between now and the next raining season is to set up a small committee to plan this thing”.

“Planning is important and the government of the day should be involved because there are things that we cannot do by ourselves: we want to bring in tractors or whatever machinery; bring in fertilisers and seeds; the government must be involved and it should start now and if anybody in the government is listening to me today, I’m talking with the minister of national security, he should get involved. It’s not political. I’m not a political animal. I’m a military man to serve my country. We should plan now, prepare for the next major season; a small committee, which Class FM is putting together, I won’t be part of it … get the government involved, plan this thing properly and then come the next rainy season, April next year, we are ready for it”, he advised.

In his view, self-sufficiency would win Ghana off its dependence on the IMF and World Bank.

“If we are going to wait for the IMF, to come and do what? IMF doesn’t grow cassava, there’s a water body in the Keta Lagoon, sitting down there, can’t we have two million tilapia fingerlings and make feed out of cassava and soybean and feed them? Who says we can’t do it? Of course, it can be done”, he stressed.