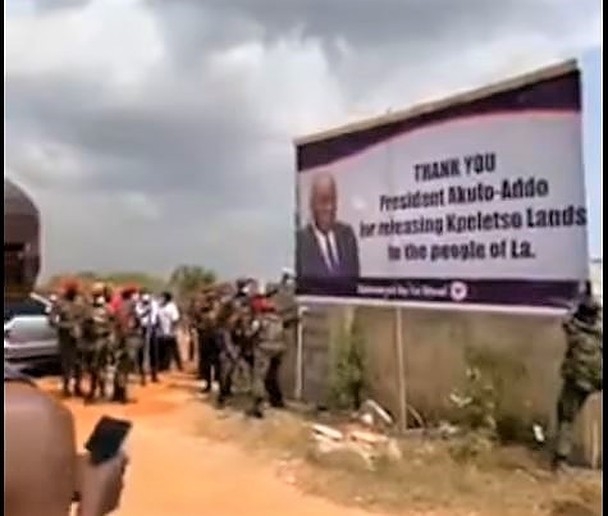 The military men were seen destroying the signpost

A group of men sporting military uniforms have been captured on camera, destroying a signpost erected by a group calling itself the Coalition of La Youth Association (COLA) in appreciation of President Akufo-Addo’s intervention in releasing a parcel of land that was taken over by the military and some government officials.

They invaded the piece of land and destroyed the signpost, which had the inscription, “Thank you President Akufo-Addo for releasing Kpeletso Lands to the people of La” amidst shouts from onlookers.

The onlookers said the military men were disrespecting the President by their actions.

COLA, on Thursday, 14 January 2021 claimed possession of a piece of land within the La community that was occupied by military and the Government of Ghana.

The group massed up on the piece of land, with the “blessing” of their chiefs to take possession of their lands.

According to them, the military personnel were selling portions of the land to private developers.

The Secretary and Spokesperson for COLA, Mr Jeffrey Addokwei Tetteh explained to Class News that even though a formal Memorandum of Understanding (MoU) could not be signed between the government through the Ministry of Lands and Natural Resources and the La chiefs, President Akufo-Addo promised to give them back their land.

Mr Tetteh therefore noted that the group has the right to prevent the Military from encroaching the land, pending the signing of the MoU to formalise it.

He said: “We've been waiting until quite recently we noticed that the Military has actually stepped onto the land again and they were grading the place with their bulldozers. So we wrote to the minister and told him that the people of La are ready to take possession of their land pending the signing of the document and so our chiefs gave us their blessing.

“The Ministry hasn't said anything and we believe that silence means consent. That is why in conjunction with our chiefs we have come here today to take possession of the land,” Mr Tetteh added.

He continued: “So if you see the people of La here today we are actually here to actually make good the promise that the president made to us.”