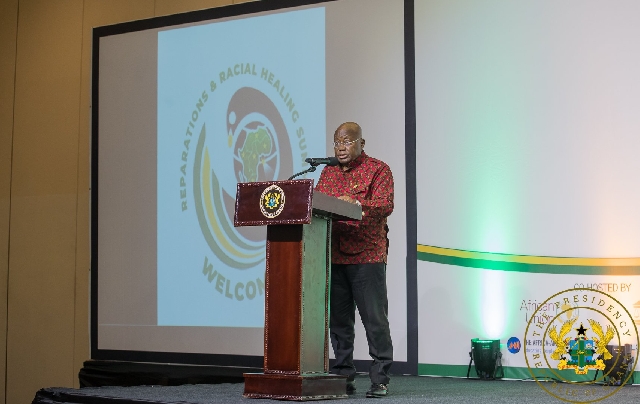 President Nana Addo Dankwa Akufo-Addo has indicated that reparations for Africa and the African diaspora are long overdue.

In his keynote address at the Reparations and Racial Healing Summit, held at the Kempinski Hotel, Accra on Monday, 1st August 2022, the Ghanaian president noted that predictably, the question of reparations becomes a debate only when it comes to Africa and Africans.

“Likewise in the United States, owners of slaves received three hundred dollars for every slave they owned; the slaves themselves received nothing.

“Take the case of Haiti, which had to pay reparations amounting to twenty-one billion dollars ($21 billion) to French slaveholders in 1825 for the victory of the great Haitian Revolution, the first in the Americas and the Caribbean which freed the slaves. It was a payment made under duress that impoverished Haiti throughout the 19th century till today.”

He continued that “Native Americans have received and continue to receive reparations; Japanese-American families, who were incarcerated in internment camps in America during World War II, received reparations.

“Jewish people, six million of whom perished in the concentration camps of Hitlerite Germany, received reparations, including homeland grants and support. So, it is time for Africa, 20 million of whose sons and daughters had their freedoms curtailed and sold into slavery, also to receive reparations.”

He added that “No amount of money can restore the damage caused by the Trans-Atlantic Slave Trade and its consequences, which have spanned many centuries but, nevertheless, it is now time to revive and intensify the discussions about reparations for Africa. Indeed, the time is long overdue.”