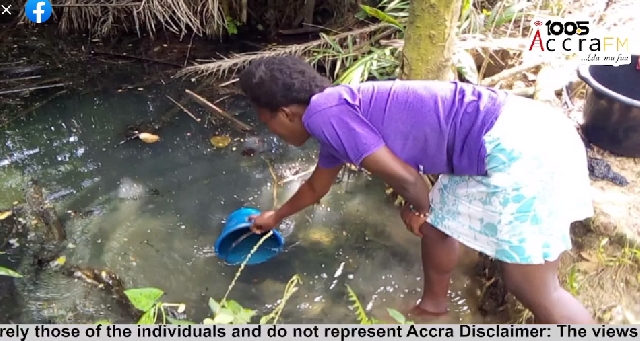 Scores of residents of Suhum-Abessim-Dawa communities in the Eastern Region on Thursday, 25 November 2021 demonstrated to register their displeasure at the constant pollution of the Densu river.

According to the residents, who were from areas such as Adotowa, Atabia, Yeboahman and surrounding villages, the turbidity level of the river has risen because of illegal mining activities (galamsey) along the banks of the water body.

The residents in these communities in the Eastern Region are complaining about the high levels of pollution.

The residents said the government’s claim that it has overpowered illegal miners in the region was not true and that the recent pollution of the river is an attestation to the fact that galamsey activities were still ongoing.

The residents contend that the activities of illegal miners were seriously ongoing, leading to the high level of pollution of the river along the said communities.

Speaking after the demonstration at Suhum-Abessim-Dawa, Pastor Samuel Tetteh Kaizer, one of the organisers of the march, told Accra100.5 FM’s mid-day news that in the last two weeks, the river has become muddy as a result of activities of galamseyers along the banks of the river.

He said residents in the above-mentioned communities have no pipe-born water, adding that their only source of water is the Densu.

“Any time the river is polluted, people in these areas suffer massive stomach upsets if they drink the water,” he bemoaned.