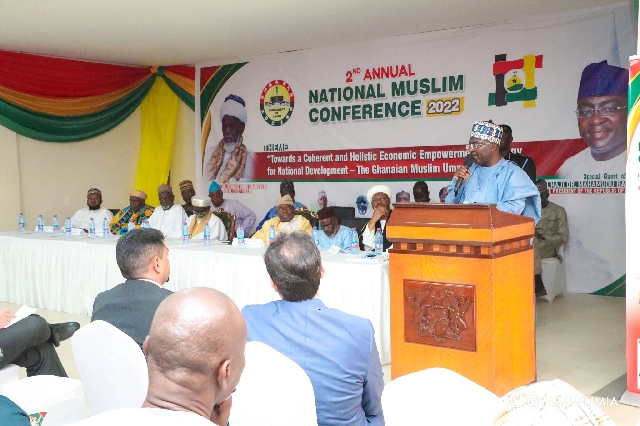 The Vice President, Dr Mahamudu Bawumia, has urged the leadership of the National Muslim Conference (NMC) to join forces with other faith-based groups and partner with the government to achieve inclusive development for the betterment of the country.

The National Muslim Conference is a coalition of Muslim Sects and stakeholders under the auspices of the National Chief Imam and the Muslim Caucus of Parliament. The objective of the NMC is to bring all Muslims together to contribute meaningfully toward the welfare of its community members and national development.

Speaking at the opening of the second edition of the NMC in Accra on Thursday, September 22, Dr Bawumia lauded the NMC for its national development ideals, and also called on the leadership of the NMC to help protect the enviable peace and unity between Muslims and Christians by joining hands with their Christian counterparts to strive for a collective national development, as key national stakeholders.

"Having carefully studied the Deed of the Conference, I came to the understanding that the NMC is seeking to galvanise the energies, human and material resources of the Muslim Ummah (community) in Ghana to spur national leaders of the Muslim Community into action for the collective growth of the Ummah and Ghana as a whole," Dr Bawumia said.

"The NMC could not have chosen any growth and developmental indicators better than the four thematic pillars and objectives captured under the Deed of the NMC, namely; Education, Health, Finance and Economic Empowerment of the Muslim Ummah in Ghana.

"The thematic areas would not only find space in the development agenda of Government but are also in conformity with the developmental agenda of the African continent and the United Nations."

The Vice President noted further that, for the government, bridging the development gaps between less privileged communities and others,  remains a priority,  for the overall growth of the country.

"As a government, we believe that all efforts must be made to get rid of any form of exclusion, regardless  of which community is involved, be it Christian, Muslim or any other community, as we are one people with a common destiny."

Dr Bawumia stressed that aside from such inclusive development policies by the government, there is the need for intra-faith dialogues, as well as greater engagements between the nation's two leading religious groups (Muslims and Christians) to proffer strategies and plans, in collaboration with the government, to mitigate the day-to-today challenges facing the people.

"Ghanaian Muslims have always joined their hands with their Christian counterparts towards nation building. As far back as 1932, Muslims in the Gold Coast were alive to their responsibilities and had formed the Gold Coast Muslim Association, which was established as welfare and social association.

"There is no doubt that Ghanaian Muslims and Christians are unique and are able to join hands, work together and excel in various fields - from sports to politics.

"The beautiful spectre of a Jummah congregation around Nima Roundabout in Accra extending to the frontage of a church, the sight of a National Imam in a Chapel to exchange pleasantries with Christian leaders and a Christian President teaming up with a Muslim Vice President, in the case of my boss and I, are some of the  beautiful examples of what Muslims and Christians can do together at our workplaces, communities and the nation, once we continue to tolerate each other and show respect to our religious diversity."

While commending leaders of the NMC for their vision, Dr Bawumia also urged them to prioritise education and get their community members to take full advantage of the government's expansion of free access to education, because  "education is the surest way of empowering people, accelerating development and alleviating poverty."

The National Chief Imam, Sheikh Osman Nuhu Sharubutu, stressed the need for strengthening tolerance, peace and unity in the country, and urged the nation to continue to be grateful to God for the grace He has bestowed on the country as a peaceful nation in the midst of conflicts in the sub-region.