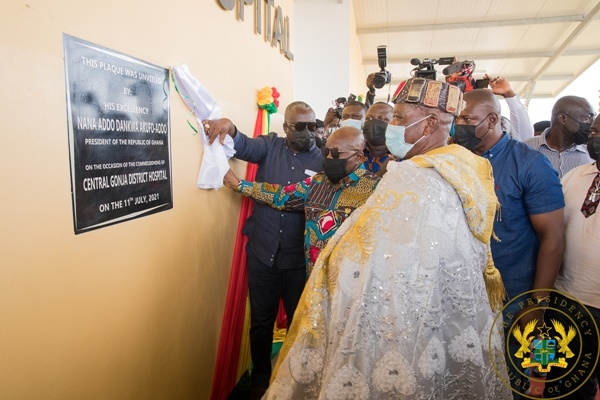 President Nana Addo Dankwa Akufo-Addo, on Sunday, 11 July 2021, opened the 85-bed Central Gonja District Hospital located in Buipe in the Savanna Region at the start of his 2-day tour of that part of Ghana.

The Buipe Hospital, of which construction commenced in 2018, is one of six medical installations for which the government secured an 80-million-euro facility from Raiffesen Bank of Austria.

The hospital, together with five others in Somanya, Sawla, Bamboi, Tolon, and Ketu North, was constructed by Vamed Engineering GmbH of Austria, with President Akufo-Addo, on 20th October 2020, opening the 60-bed Ultra-Modern Hospital for Weta in the Ketu North District.

The Buipe Hospital is an 85-bed hospital, which is fitted with an out-patient department, Radiology unit, Laboratory, Pharmacy, Dental Unit, male and female wards, as well as paediatric and maternity units.

Indeed, prior to the construction of the hospital in Buipe, its residents had to rely on the Teaching Hospital at Tamale, or the Holy Family Hospital in Techiman.

Considering the distances to be travelled from Buipe to Tamale or to Techiman, it had become imperative that Government constructs a health facility in Buipe to take of the health needs of the people of the Central Gonja District.

The president was hopeful that the hospital will help improve the health needs of the people of the district.

Indeed, in addition to the newly constructed Buipe District Hospital, President Akufo-Addo also revealed that Government has constructed health facilities in Mpaha, Digma and Tosinape and Kigberipe, all in the Central Gonja district.

Earlier in the day, the president paid a courtesy call on the overlord of the Gonja traditionl area, Yagbonwura Tutumba Boresa Sulemana Jakpa, to thank him and the region for the support offered the New Patriotic Party in the 2020 elections.

Touching on the request for potable drinking water made by the Yagbonwura, President Akufo-Addo indicated that he had already cut the sod for the construction of the Damongo Water Supply to address the problem.

He explained that COVID-19 had delayed the implementation of the project, “but I am happy to inform you that by the first week of August the contractor will be moving to site to begin work.”

President Akufo-Addo also visited the site of the construction of a new 3-Storey Regional Co-ordinating Council (RCC) Administration Block for the Savannah Region, located at Damongo.