COVID-19: Australia warns its citizens of jail and $50,000 fine if they return from India 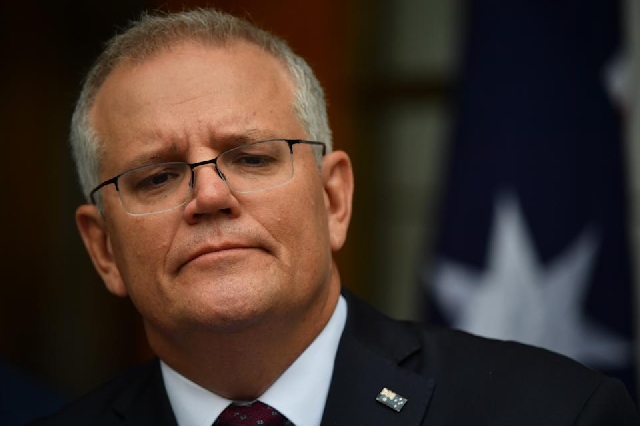 Prime Minister Scott Morrison during a press conference in the Prime Ministers Courtyard at Parliament House on March 17, 2021 in Canberra, Australia.

Even in the pandemic era of closed borders, Australia's latest travel restriction stands out: Anyone, including Australians citizens, who arrives in the country after visiting India in the previous 14 days can face up to five years in jail, a $50,000 fine or both.

On Monday, Australian Prime Minister Scott Morrison defended the move. Morrison pushed back against critics who said the new restrictions were racist because of their large impact on Australian citizens of Indian heritage.

"This is about health," Morrison said during a Monday radio interview, adding that he was "deeply, deeply concerned about the humanitarian crisis in India."

Australia had seen a sevenfold increase in the percentage of people travelling from India who tested positive for the coronavirus, the prime minister told Sydney's 2GB radio station.

"It's a high-risk situation in India," Health Minister Greg Hunt told a separate televised news briefing in Melbourne on Monday, adding that the decision had been "agonizing" for the Australian government.

The decision to threaten even Australian citizens with jail time if they return home from India during its record-breaking coronavirus surge is a significant escalation of border restrictions for Australia, an island nation that had already mandated strict controls at its borders throughout the pandemic.

Australia's new rules come as a variety of other nations imposed travel restrictions on India, where covid-19 cases are surging because of virus variants, lax restrictions and slow rates of vaccination.

New U.S. restrictions on travellers from India go into force Tuesday, but citizens, permanent U.S. residents and some others are exempt.

While other nations have generally made exceptions for citizens - even if, for practical reasons, many still ended up stranded abroad - some critics have said these exceptions undermined the aim of controlling the virus.

India recorded 368,147 new cases of coronavirus Monday, down from its record of 401,993 Saturday but still far more cases recorded in a single day than any other nation. The country's official death toll stands at more than 219,000, though some say it might be higher.

Morrison announced Friday that Australia would pause flights from India until at least May 15 over coronavirus concerns.

But over the weekend, Hunt revealed that as of Monday, anyone arriving in Australia after spending time in India could face jail time or a fine.

"The government does not make these decisions lightly," Hunt said in a statement released Saturday, adding that "our hearts go out to the people of India - and our Indian-Australian community."

Under previous border restrictions announced last year, Australia allowed in only citizens, residents and a few other select groups.

Only 8,000 arrivals were allowed a week, and those that returned were forced to isolate in a hotel for 14 days at their own expense. Even then, the policy resulted in tens of thousands of Australians being stranded abroad.

The stricter new rules for travel from India, however, are likely to have a particular impact on the Indian diaspora in Australia, which makes up around 2.8 per cent of the population, according to official figures.

Australian media reported that there were around 9,000 Australian citizens in India affected by the ban, some of whom had been expecting to return home imminently.

"We should be helping Aussies in India return, not jailing them," tweeted Matt Canavan, deputy Senate leader of the National Party, which is in coalition with Morrison's Liberal Party.

Anthony Albanese, head of the opposition Labour Party, called the jail threats "quite extraordinary" and asked why Australia had never taken similar measures against the United States during its worst coronavirus wave.

Speaking on Monday, Morrison said he was disappointed by the "politicization" of the issue and said that similar measures had been put in place at the start of the pandemic with flights from China.

"There's no politics or ideology in a pandemic, and I am constantly taken aback by those who seek to inject it into it," Morrison said.

But the policy has received significant coverage within India, and some Australian conservatives, including backers of Morrison's centre-right Liberal Party, have criticized the move.

"These are Australian citizens," Andrew Bolt, a conservative commentator, wrote for the Herald Sun. "They had to renounce their Indian citizenship to become Australians. Australia is their only country, and has a duty of care towards them.

"It should mean something to be Australian. It should mean that when disaster strikes, wherever you are in the world, Australia will try to save you," Bolt added.