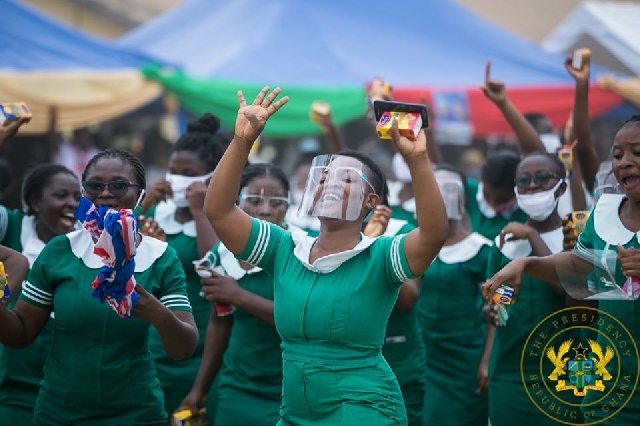 The Union of Professional Nurses and Midwives, Ghana (UPNMG) has kicked against plans by the Youth Employment Authority (YEA) to recruit 5,000 SHS graduates to assist nurses working at the Community-Based Health Planning and Services (CHPS).

In a statement, the UPNMG revealed that currently, there are over 22,000 trained but unemployed Nurses and Midwives, making the YEA’s plans of recruiting SHS graduates worrying.

“These unemployed Nurses and Midwives are made up of 2019 referral batch, 2020 batch who have finished their rotation and 2019 NAC/NAP batch. In addition, those who were employed early this year have still not been paid after several months of service to the country,” portions of the statement read.

The UPNMG further said in its statement that the three months training program planned by the YEA for these SHS graduates is woefully inadequate since one requires at least two to four years to be trained and certified as a Nurse or Midwife.

“Nursing and Midwifery is a profession that requires at least two to four years of intense training in both academic and practical skills. It is therefore unacceptable to infiltrate the system with three months or less trained individuals to nurse patients at a level as important as the CHPS which has been considered as one of the pragmatic strategies for achieving universal health coverage of a basic package of essential primary health services with international recognition,” the statement said.

The UPNMG warned of dire consequences if the YEA goes ahead to implement the policy, citing a report by the National Health Service (NHS) which indicated that the use of unskilled nurses to support workers in the UK led to an increase in mortality rate, inadequate patient care and negative nurse outcomes.

“The National Health Service (NHS) reported that the use of unskilled nurses to support workers in the UK led to an increase in mortality rate, inadequate patient care and negative nurse outcomes. Additionally, Dr. Linda Aiken of the University of Pennsylvania School of Nursing, said ‘reducing nursing skill mix by adding unskilled nursing personnel may contribute to preventable deaths, erode quality and safety of hospital care and contribute to hospital nurse shortages”. The research warned European hospitals to desist from recruiting unskilled nursing staff since such practice can be life threatening for patients. We believe this is a tangent we should avoid in these pandemic times where wrong assessment can lead to wrong impression and diagnosis of patients,” the statement said.

The UPNMG referred to the move by the government to employ SHS graduates to assist nurses in CHPS as a distortion of the standard of the Nursing and Midwifery profession and called on government to “take immediate steps to employ the over 22,000 unemployed nurses rather than this attempt to hire cheap labour.”

The UPNMG reiterated that it is not preventing SHS graduates from becoming Nurses or Midwives and urged such graduates passionate about working in the health sector to seek training from the appropriate institutions.

“Let us put on record that we are not in any way preventing SHS graduates from becoming Nurses and Midwives, but if they so wish to work in the health system, they should be trained in the appropriate institution and by qualified health tutors for the professionally accepted number of years for proper deployment into the health system,” the statement said. 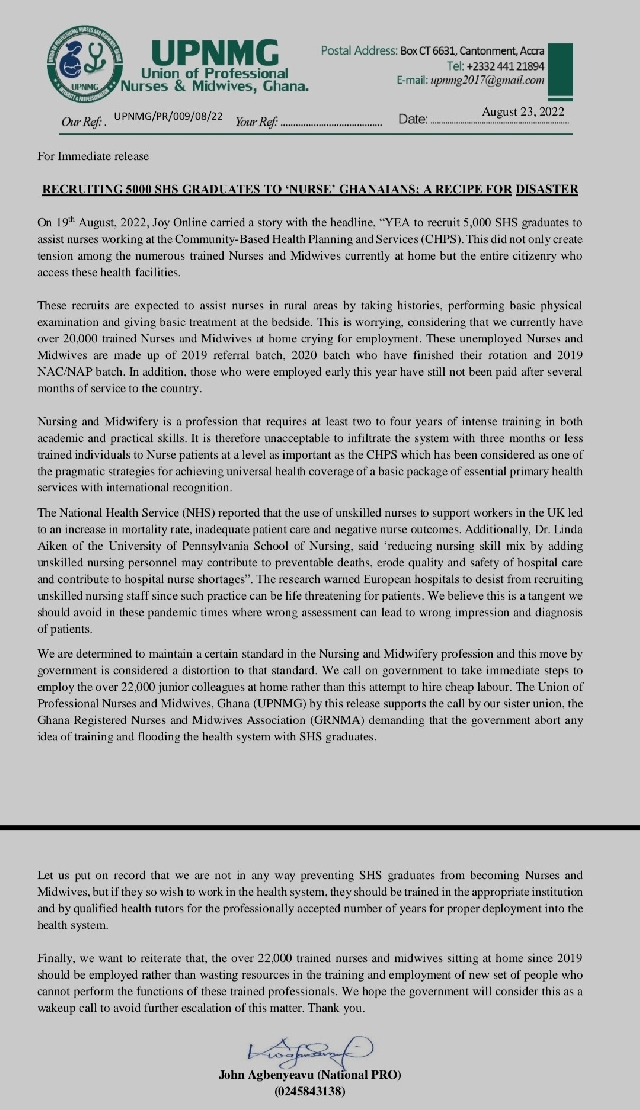