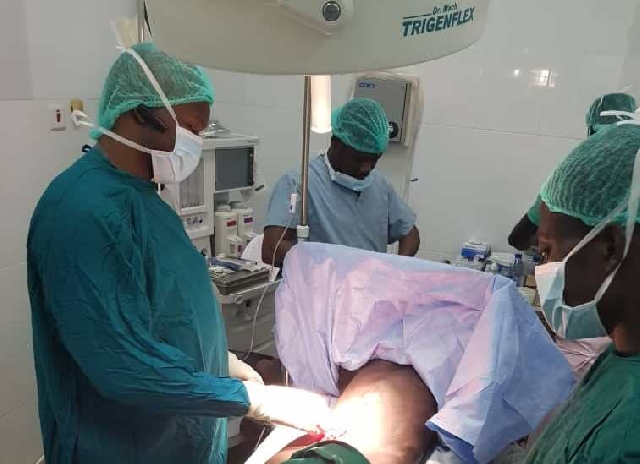 Their team of specialist surgeons also conducted free surgeries for 46 of the farmers.

Thirty-two of the surgeries were for hernia, four for breast lumps, two for fibroid, four for hydrocoele and four for lipomas and ganglions.

Six of the surgeries were performed on children for various conditions.

The surgeries, fully-funded by Kuapa Kokoo, were conducted in conjunction with the Dadieso government hospital.

Fatima Ali, National President of Kuapa Kokoo and Mr Samuel Adimado, Managing Director at Kuapa Kokoo, explained in separate interviews that the event formed part of Kuapa Kokoo’s corporate social responsibility to the farmers and the communities where they operate.

They believe that healthy farmers will be more productive, hence the medical outreach event.

The medical team was headed by Dr Fred Bedzrah, a Specialist Family Physician and comprised of two specialist surgeons; one ophthalmologist, one dentist, two anesthesiologists, one pharmacist, dispensary technicians, nurses and other allied health staff.

Dr Bedzrah observed that the screening has largely highlighted problems associated with non-use of Personal Protective Equipment (PPE) by the farmers.

“Eye problems, respiratory conditions and musculoskeletal and nerve problems are rife amongst them, due possibly to their improper handling of chemicals including weedicides and insecticides”, Dr Bedzrah explained.

He also added that hernia is a common occupational hazard for the farmers due to improper lifting techniques they employ at work.

He said the team will increase awareness on these conditions and also increase farmer participation in cooperative issues.