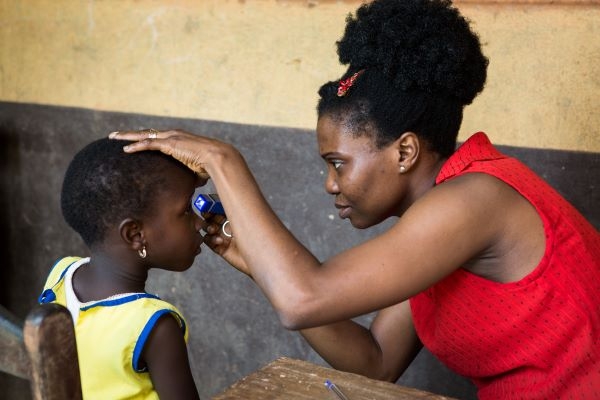 A girl's sight being checked

As the world marks World Sight Day today, eye health organisation, Sightsavers, is warning that unless there is a strong, continued effort to improve eye health services worldwide and in Ghana, millions will lose their vision unnecessarily.

The NGO, however, says that this crisis can be tackled if everyone plays their part.

David Agyemang, Senior Programme Manager of Sightsavers Ghana Country Office says, “The number of people in need of eye care around the world is increasing dramatically. Without intervention, the number of people who are blind globally could triple to around 115 million people by 2050. We are in an eye health crisis, but it is not a subject that gets the attention it deserves”.

According to the World Health Organisation, more than 2.2. billion people, a quarter of the world’s population, have a visual impairment, with four times as many people affected in low- and middle-income countries.

Over half of this vision loss is preventable or treatable, but a lack of quality eye care services means that many people don’t get the care they need. And countries are losing out as a result, as it is estimated that the productivity loss of visual impairment and blindness is $410.7 billion globally each year.

Dr Sunday Isiyaku, Country Director of Sightsavers Ghana Country office says: “Access to quality eye care has a hugely positive impact on all areas of people’s lives. It can increase people’s ability to learn and work, which can directly lead to reductions in poverty and hunger and improve well-being”.

According to Ghana’s 2015 blindness and visual impairment study, 0.7% of Ghanaians are blind.

The prevalence of blindness is higher in the rural areas of Ghana (0.79) than in the urban areas (0.67).

One disturbing finding was that uptake of glasses by Ghanaians who were identified to have refractive error is as low as 5%. More than half (54.8%) of blindness in Ghana were due to Cataract.

The government of Ghana and its partners are doing their best to prevent people from going blind from Cataracts.

Dr James Addy, the Head of Eye Care, Ghana Health Service says: In 2021 alone, we have conducted 5,664 cataract surgeries. We need to make sure everyone, everywhere can access the eye health services they need. Every single one of us has a part to play in making it happen, from the government to healthcare workers, to donors, supporters, and individuals.”

Sightsavers’ call is part of a World Sight Day campaign, ‘Everyone Counts’, by the International Agency for the Prevention of Blindness (IAPB). It aims to focus attention on the global issue of eye health.

Since 1950, Sightsavers has collaborated with ministries of health and partners in over 30 countries to eliminate avoidable blindness.