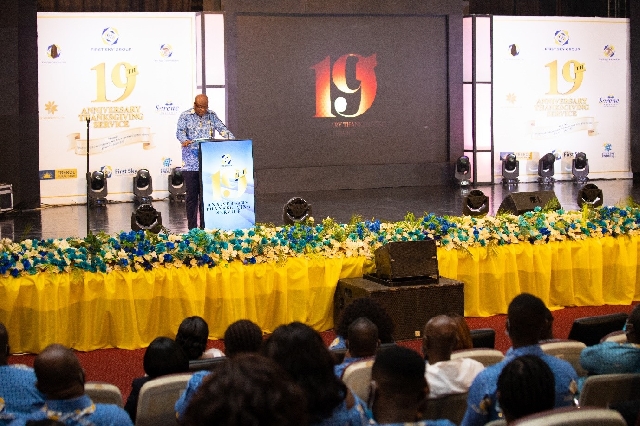 Eric Seddy Kutortse at the lectern

The founder and Executive Chairman of First Sky Group, Mr Eric Seddy Kutortse, has made a passionate appeal to the government to consider making, at least, two sessions of dialysis treatment a part of the medical services covered by the National Health Insurance Scheme.

In 2017, the First Sky Group decided to support the Dialysis Unit of the Korle Bu Teaching Hospital in Accra by paying all the medical bills of patients at the facility and instituted free dialysis for patients who frequent the unit.

Making the appeal at the 19th Annual Thanksgiving Service of the Group in Accra, Mr Kutortse recalled that over the past three years, the First Sky Group has, in collaboration with a team of kidney specialists and transplant surgeons from Transplant Links UK, based in Birmingham, sponsored free kidney transplants in Ghana for four patients with kidney failures.

According to Mr Kutortse, the appeal has become necessary due to the numerous requests for financial support that First Sky Group has been receiving from other health facilities in the country since it adopted the Renal Dialysis Unit of the Korle Bu Teaching Hospital four years ago.

“But for our intervention, it is fair to say that many beneficiaries would have either lost their lives or would have been incapacitated by challenges with their kidney dysfunction. Since the inception of the programme to date, the First Sky Group has spent GHS20,000,000 on the Free Dialysis Project”. Mr Kutortse noted.

“First Sky Group’s long-term contribution to addressing the challenges associated with the treatment of kidney dysfunction in the country is to sponsor the establishment and operationalisation of a modern Kidney Transplant Centre in Ghana, the first of its kind in West Africa, to serve patients within the country and the sub-region, who, otherwise, would have been flown to India, South Africa or elsewhere for medical attention”, the First Sky Group Executive Chairman promised.

He said covering the cost of dialysis under the NHIS was achievable because partial coverage of the treatment cost is being implemented in other countries such as Kenya and South Africa and hoped that when done, it would go a long way to improve the quality of life of patients, majority of whom are young and form the economically productive group of the Ghanaian society and who can potentially be integrated back into society with adequate treatment.

The Minister of Sanitation and Water Resources, Mrs Cecilia Dapaah, who represented President Nana Addo Dankwa Akufo-Addo, praised the First Sky Group for its contribution to national development by assuring that Ghanaian companies which are doing well, would be assisted to continue to capture the commanding heights of the economy.

In his sermon, the founder and General Overseer of the Christian Action Faith Ministries International, Archbishop Nicholas Duncan-Williams, admonished the congregants to develop a lifestyle of gratitude and appreciation to God for his unending mercy toward humanity.

In attendance were the Vice-President of Liberia, Dr Jewel Howard Taylor; senior members of the clergy, ministers of state, MPs, staff of First Sky Group, partners, stakeholders and the media.