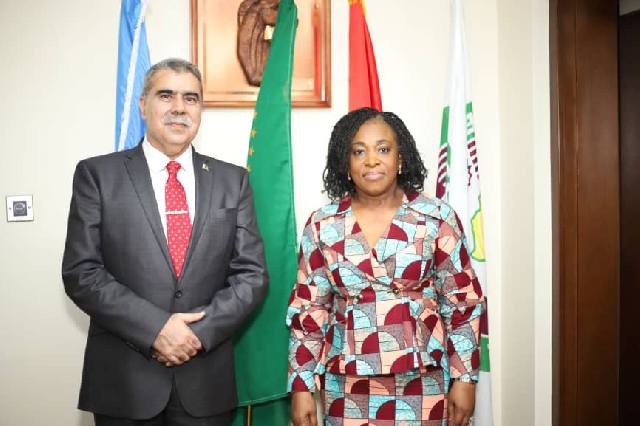 Ambassador of the Islamic Republic of Pakistan to Ghana, Major General (RTD) Waqar Ahmad Kingravi an

The government of the Islamic Republic of Pakistan is expected to provide some medical camps in Ghana.

The Ambassador of Pakistan to Ghana, Major General Waqar Ahmad Kingravi (RTD), made this known on Tuesday, 29 October 2019, in Accra, when he paid a courtesy call on Ghana's Minister of Foreign Affairs and Regional Integration, Ms Shirley Ayorkor Botchwey.

The meeting afforded him the opportunity to enquire from Ms Botchwey the progress that has been made to grant diplomatic clearance to Pakistan's navy and hospital ships that are expected to arrive at the port of Tema by the end of November 2019.

It also afforded him the opportunity to enquire from the Minister the arrangements made regarding where the camps would be established in Ghana.

He said the hospital ship is bringing along medical doctors, medical equipment and drugs. The camps, he told the minister, would provide free medical services to the people of Ghana.

All medical tests and surgeries will be free, he said, but noted that "we want first, diplomatic clearance for that".

Responding to her guest, the minister observed that the medical camps were testament to the strong relationship between both nations and the mutual desire to enhance the relationship, even though either does not currently have a physical presence in each other's country.

The camps are meant to enhance diplomatic relations between the two countries, she explained.

"What you are proposing/planning is clearly something that goes toward enhancing the relations between our two countries and, of course, there is the need for diplomatic clearance," she clarified.

The Ambassador said the Ministries of Health and Defence have been notified of the need to issue the clearance, adding that the ships are already on their way.

The minister promised to expedite action on getting the clearance since, according to her, the medical camps would benefit the people of Ghana.