Shut Kpone landfill or we sue – Angry youth to gov't 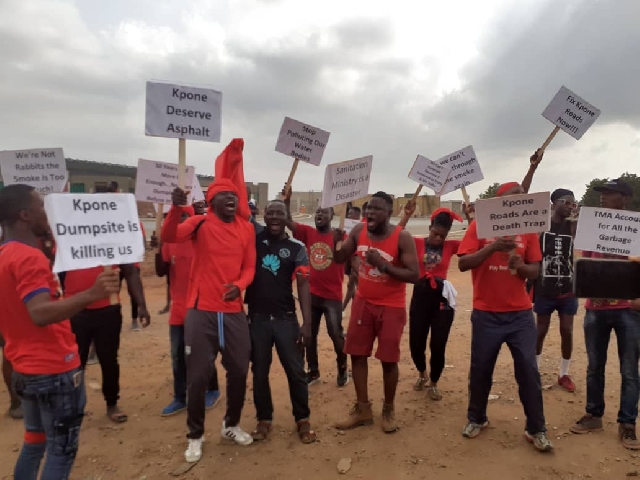 Kpone Organised Youth for Development during the demonstration

The Kpone Organised Youth for Development in the Greater Accra Region have threatened to sue government and the Ministry of Sanitation for taking away their rights as residents to live in harmony with their environment if the Kpone Landfill site is not shut down immediately.

There have been persistent calls on government by residents of the community to shut down the landfill site as residents say it poses a health threat to them.

The youth therefore embarked on a demonstration on Monday, 9 March 2020 to force government to shut down the site immediately.

The demonstrators who were clad in red apparel wielded placards with in inscriptions such ‘Sanitation Ministry is a Disaster, Stop Polluting our water bodies, Kpone dumpsite is killing us’ among others.

Conveynor for the group Nii Noi Tetteh told Class News’ Blessed Sogah that: “We went there [Ministry of Sanitation] engaged them, that was in November and we were given very firm assurances that come end of February they have seen the need for this place to be shut down so they have plans far advanced to relocate the landfill site and so they pleaded with us to halt our action our planned peaceful demonstration and so against our will, reluctantly, we obliged.”

The youth also assured that if nothing is done, they will sue the government and the Ministry of Sanitation for taking away their rights as residents to live in harmony with the environment.

Mr Tetteh stated: “If need be, we will, yes, we will sue the government and the Ministry of Sanitation in particular to make sure the right thing is done.

“We’re suing them because we’re not breathing free air, the air is polluted, we’re dyeing, it is part of their mandate to make sure that refuse is properly disposed of, they’re shirking in their responsibility.”

Meanwhile, a resident and one of the demonstrators explained that: “This is the water that sips from underneath the rubbish over a period and then this is very poisonous. This kills in five minutes the danger is that ideally, the engineer is supposed to have a well to contain this thing from underneath.”

Another Resident said: “This issue is even long overdue, this is a World Bank Funded project and for that reason, they saw the need to come and do an audit over here when they came back the issue they saw over here was so appalling that they said that even before the rainy season starts, this place will be shut down according to the report. Infact they didn’t do anything about it just two months after they had done the audit, it started raining.

“We want this place to be shut down first and then decommissioned.”