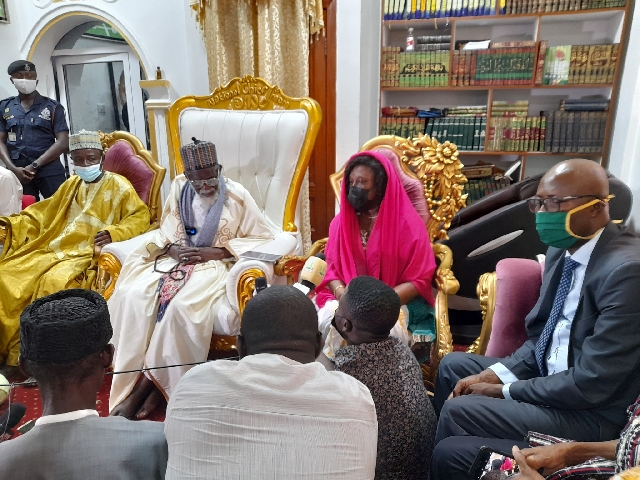 Management of Ridge Hospital with the Chief Imam

In the said video, a man alleges that some hospitals, especially the Ridge Hospital, were stealing vital human parts such as kidneys for sale, an act the man in the video said was targeted at people belonging to the Muslim faith.

However, the officials from the regional directorate have completely dismissed the allegations, describing them as “untrue” and “distasteful”.

Addressing the meeting with the Chief Imam at his residence in Fadama, Accra Wednesday, the Greater Accra Regional Director of Health Services, Dr Charity Sarpong, said the video in circulation was “disturbing” because it did not create harmony.

“The issues he put across were not true and he tried to create separation, fear and panic within a certain section of the community. There is no iota of truth in them.

“As a health sector, we make sure that we provide quality health care to anybody who comes, irrespective of your religious background, race and social standing,” she said.

Dr Sarpong further appealed to the Chief Imam to assist the health sector in allaying the fear of the public, particularly the Muslim community, over the matter, insisting that “it can never be true and it can never happen.”

“We want to say that nobody should come to the hospital fearing for their lives. You are coming to the hospital to be healed and not to be killed. I believe that every human life is important. We have gone into a profession where we have sworn an oath to care for the sick; not for a particular group,” she stated.

The regional director of health services appealed to the Chief Imam to tell everybody to have confidence in the health system.

“We are there for everybody irrespective of your religion or race. We are all one people and we will work within the confines of our ethics and professional values to deliver quality health care at all times,” she advanced.

Dr Sarpong also gave an assurance that the directorate would hand over the circulating video to the authorities so that it was investigated and the culprit made to answer or prove his allegation.”

In his response, Sheikh Sharubutu said he appreciated the urgency with which the officials responded to the development.

Making reference to the Holy Qur’an, he indicated that his office would not rush into taking any actions based on the allegations making rounds on social media.

“If the mischievous person comes to you with any information, seek an explanation that will lead you to the authentication of the information before you act. Therefore, we do not work with what somebody says just like that, like such information. We will apply God’s own commandment in dealing with some of these things to know whether they are false or true,” he said.

“Medical practitioners are people who help us. We are praying that God will support them. Anyone who comes to us with any information about your work, we will not work with that information. Except we have investigated and found the truth,” he stated.

The Chief Imam promised to use all available platforms to help in impugning the allegations.

“We will propagate the message. We will dismiss completely the allegations with our platforms,” Sheikh Sharubutu said.