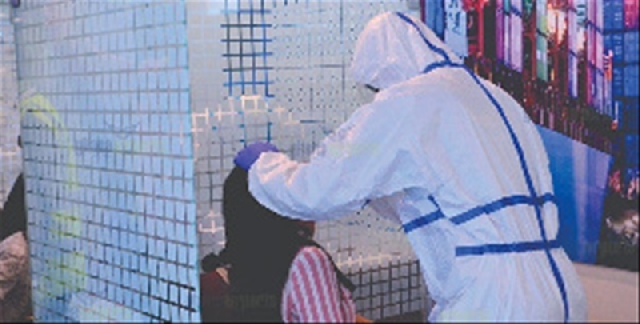 An official administering COVID test at the airport

The Minority in Parliament has called for the immediate termination of the contract agreement between government and Frontiers Healthcare Services for COVID 19 testing at Kotoka International Airport.

It follows a revelation by Transport Minister, Kweku Ofori Asiamah that per each US$150 testing done at the Airport, government of Ghana only takes US$10 as against US$140 for the company.

The Minister disclosed this when he attended upon the house to answer a question in the name of Minority Leader, Haruna Idrissu but asked on his behalf by Deputy Minority Leader, James Avedzi Klutse.

According to Mr Asiamah, between September and December last year, total amount made from testing at the airport sums up to over US$17 million. Out of this, US$16 million went to Frontiers Healthcare Services while Ghana had a little over US$1 million.

The Member of Parliament for South Dayi, Rockson Dafeamekpor told Class News’ Parliamentary Affairs reporter, Charles Akrofi that the minister’s explanation was “convincing  to the extent that, that is the fact. We have always known. You know, it is taking about a year for the features of this transactions to be known to the public”.

In his view, “it was not a reasonable contract for government to enter into with a company to offer such facility or services which we think Noguchi could have offered and these proceeds could have gone to improve Noguchi or we could have even built another Noguchi in another location in this country. We're paying to a private man, as much as US$140 for every US$150 fee charged. That is the tragedy of the situation”.

Describing the transaction as a “completely needless agreement”, he noted that “I think that the government is taking the country for granted…You cannot offer such an agreement for services to a company for which it is generating proceeds and then the percentage of proceeds that is coming to us is about 15 percent. It is most unacceptable”.

Mr Dafeamekpor further stated that in the coming days some members of the health committee will bring the issue up in Parliament for thorough deliberations.

He called for the termination of the agreement because, given the terms, “it doesn't make economic sense to maintain this agreement”.