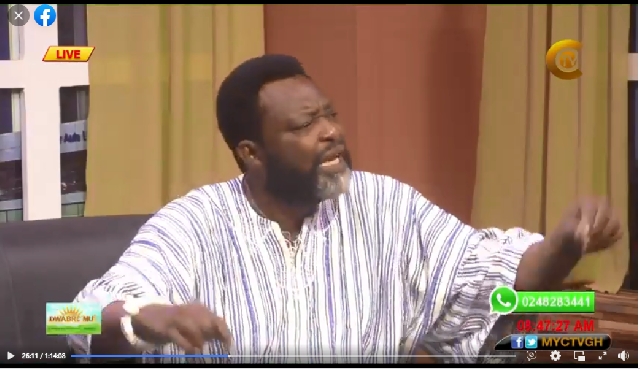 A former member of parliament for Builsa North on the ticket of the main opposition National Democratic Congress (NDC), Mr Timothy Ataboadey Awontiirim, has said former President John Mahama’s election petition was not over pink sheets but rather to stop a constitutional abuse of the electoral process.

“We [NDC] didn’t go to court because of pink sheets; we went to court to challenge a constitutional abuse – the fact that the Constitution said that you must get 50 per cent plus one before you are declared the president without which it is tantamount to a usurpation of the people’s power; it’s a coup d’état”, Mr Awontiirim told Nana Yaw Adwenpa on CTV’s morning show Anopa Dwabremu on Wednesday, 27 October 2021.

He said “per our calculation, the president did not get the required 50 per cent plus one and we also fell short of that so that was why we went to the court”.

“We didn’t go to the court to prove our pink sheets; it wasn’t a 'pink sheets' case”, he stressed.

“People should get this clear once and for all”, he said.

The former lawmaker emphasised: “We went to the court to challenge a constitutional abuse and the abuse was that the Constitution says that before the president can be declared winner of the presidential election, he must get 50 per cent plus one of the votes. That was why we went to court”.

“Our General Secretary sorted out those papers just for an example of the fact that they did not get 50 per cent plus one”.

“That was even why Tsatsu Tsikata asked: ‘Where was Jean Mensa three hours to the declaration of the results?’ She was not found at the Electoral Commission; where was she?”

The Supreme Court upheld the EC’s declaration of President Nana Akufo-Addo as the winner of the 2020 presidential election at the hearing of the petition.

Mr Mahama recently said about one million extra ballot papers, which were printed for the 2020 general elections, were thumb-printed in favour of the NPP and stuffed during last year’s polls.

“More than one million extra ballot papers were printed, which the EC claimed happened by mistake but on the day of the elections, some of the more than one million extra ballot papers had already been secretly thumb-printed in favour of the NPP”, Mr Mahama alleged when he addressed the Divisional Chief of Prestea Himan, Nana Nteboah Prah, recently, as part of his Thank You tour of the Western Region.

“And, so, all these things dented the credibility of the polls and caused an embarrassment”, the 2020 flag bearer of the NDC said.

He noted that it was important that everybody felt satisfied with the results of any election but fudging results stir up suspicion.

Mr Mahama also complained that the way the Supreme Court dealt with his election petition was not fair.

Responding to a recent assertion by the Chair of the Electoral Commission, Mrs Jean Mensa, that the 2020 polls were the best-ever for Ghana, Mr Mahama said: “I heard her [Jean Mensa] say ‘it’s the best election Ghana has ever had’ and yet you run away from scrutiny at the Supreme Court”.

“So, how do you boast that ‘it’s the best election has ever had?’”

“If you believed it’s the best election Ghana had, then you should have mounted the witness box to be interrogated for everyone to ascertain that fact”.