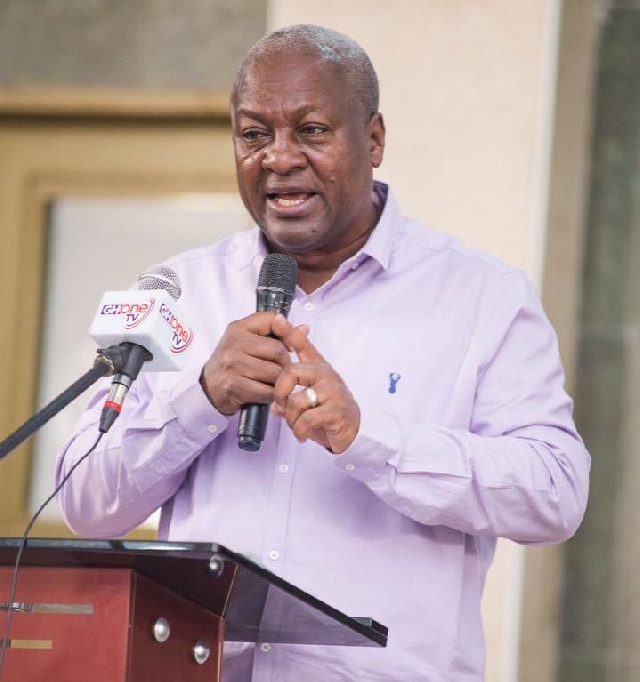 “I believe that the law should not be an instrument for partisan purposes”, the 2020 presidential candidate of the main opposition National Democratic Congress (NDC) told the party’s Professionals Forum on Thursday, 29 April 2021 at the group’s annual conference in Accra.

“I also believe that the rule of law should mean that one rule for all”, Mr Mahama noted, insisting: “The 2021 election petition will go down in history as the profound moment when the Chairperson of the EC opted to evade public scrutiny”.

“Everything was done in this trial to prevent the Commission from accounting to the people in whose name they hold office,” Mr Mahama emphasised.

The Supreme Court upheld President Nana Akufo-Addo’s victory in the 2020 polls at the end of the election petition in which the respondents opted not to call witnesses.

Still on elections, Mr Mahama urged the Professionals Forum of the party to be more active in the country’s electoral process by offering their expertise to the party during elections.

“We must ensure that we have more professionals and more educated people coming into play in respect of policing and monitoring the elections at the grassroots level”, the former president urged.

He said “collation of results is an important activity that the expertise that you people carry can help with, in terms of collating the party’s results in good time and also transmitting the results as most of you do in your professional work with information technology.”

Additionally, he said the governing New Patriotic Party (NPP) is so vindictive that Ghanaian professionals fear associating with the NDC for fear of losing their jobs or being hunted by the government.

“I think one of the good things that Pro Forum has done is to increase the confidence of our professional groups in terms of being identified as being proud members of the NDC”.

“Before the Pro Forum”, Mr Mahama observed that “we had a lot of people who support the NDC but they hide under the covers and are not willing to show their faces as supporters of NDC”.

“Of course, you can understand why. With people who are so vindictive, I mean for many of them who are still in service, I mean showing their faces is often dangerous”, he noted.

“There’s a lot of vindictive hunting down of people who are believed to be NDC and taking them out of jobs. So, this confidence and pride is making more people join the Pro Forum and it’s a very good thing”, Mr Mahama said.

His comments come a few days after Sir Sam Jonah lamented that the culture of silence appears to have returned to Ghana’s current democratic dispensation.

In a speech to Rotarians in Accra titled ‘Down the up escalator – Reflections on Ghana’s future by a senior citizen’, the executive chairman of Jonah Capital, an equity fund based in Johannesburg, South Africa, said: “In the past, when all had failed, academia was the last vanguard”.

“We all remember the role that the Legon Observer played”, he said, adding: “Under the hallowed cloak of academic freedom, men and women of conscience could write and speak words that penetrated the halls of power”.

However, he noted: “It appears to me that in recent times in our fourth Republican dispensation, the courage to stand up for the truth and the determination to uphold the common good are lost. In our dark moments as a nation, it is concerning that the voices of the intellectuals are receding into oblivion”.

“Sadly, it is a consequence of the deep partisan polarisation of our country such that everything is seen through the lenses of politics”, noting: “It appears to me that the culture of silence has returned. This time, not enforced by legal and military power but through convenience, parochialism, hypocrisy and lack of conviction”.

“Where are our Adu Boahens and PAV ANSAHs?” he asked.