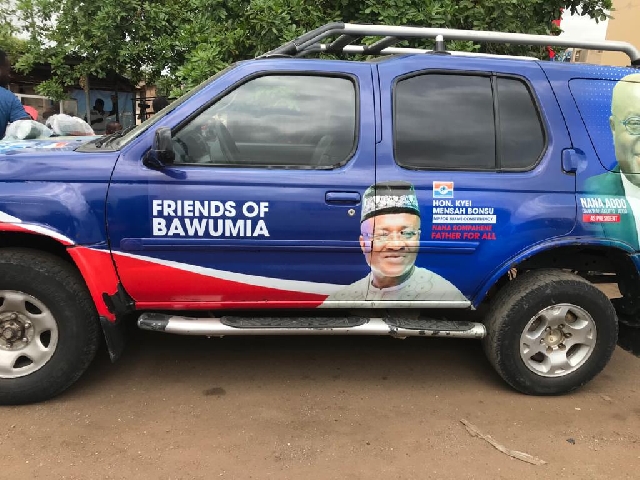 Majority Leader Osei Kyei-Mensah-Bonsu has denied supporting Vice-President Dr Mahamudu Bawumia to take over from President Akufo-Addo as leader of the party in 2024 elections.

This comes after a picture of a branded car with the image of the Majority Leader with the inscription “Friends of Bawumia” popped up on social media.

Just two months into President Akufo-Addo's second term, a power struggle in the NPP over who should take over from him has begun.

Two key names have popped up – Dr Bawumia and Trade Minister Alan Kyeremanten, although these two personalities have not publicly made any declarations.

Reacting to the internal struggle for power and the picture, the Suame MP told Kwame Appiah-Kubi on Accra100.5FM’s morning show, ‘Ghana Yensom’ on Wednesday, 24 March 2021 that he has no idea supporters of Dr Bawumia are using him to campaign for the Vice-President.

He warned that the internal struggle for leadership, if not stopped, could spell doom for the party.

He said: “I’ve not seen any branded vehicle, I’ve not heard about it and between me and my God, I’m unaware something like that is happening".

“On Saturday, I met with my party executives in Kumasi and I disagreed with those who have started campaigning for certain candidates to become flagbearer".

“I’ve no idea of a branded vehicle. Someone might have done that to tarnish my image.”

Mr Kyei-Mensah-Bonsu explained that when President Kufour was in power, he warned his appointees interested in becoming flagbearer to step aside two years ahead of the party’s congress.

“This government is not fully constituted. These things started when ministers were selected and not even vetted. The candidates will deny knowledge of it but why can’t they stop their supporters?” he wondered.

“I’m against this early battle for who to succeed President Akufo-Addo. If we don’t contain it now, the focus we need for Akufo-Addo’s second term to be successful will be derailed and if the government doesn’t perform on what basis will these people campaign? So let’s be mindful,” the Majority leader stated.