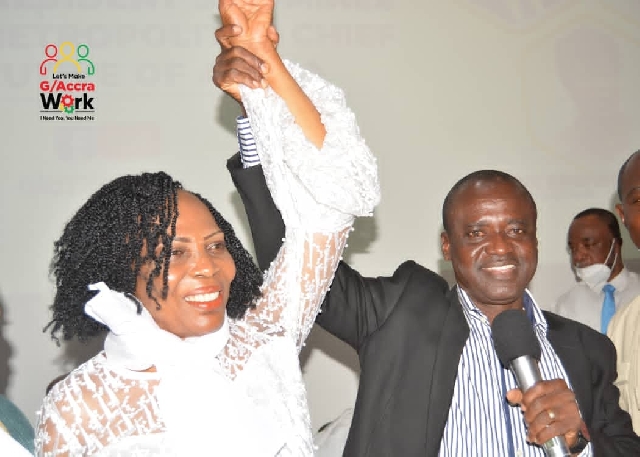 Elizabeth Sackey is now the first-ever female mayor of Accra

Former legislator Elizabeth Sackey has been confirmed as the next mayor of the Accra Metropolitan Assembly.

President Nana Akufo-Addo’s nominee garnered 30 ‘yes’ votes from all the 30 assembly members on Thursday, 7 October 2021 at the Accra Metropolitan Assembly.

The former MP’s nomination was initially met with a lot of opposition from some youth in Odododiodoo, who went on the rampage on Saturday, 18 September 2021 amidst the burning of tyres and destruction of property.

However, the outgoing mayor, Mr Mohammed Adjei Sowah, condemned the disturbances and even offered his support to his successor.

Mr Sowah said in a statement: “We should recognize the President’s authority to nominate individuals of his choice to promote his agenda, and it’s our duty to support the appointees to succeed… I totally support all the President’s nominations and commit to continue to work towards the development of the country”.

Meanwhile, the National Association of Local Authorities of Ghana (NALAG) has condemned the assault of some of its members during the confirmation process of Metropolitan, Municipal and District Chief Executives (MMDCEs) of Ga the Central Municipal Assembly in the Greater Accra Region and Achiase District Assembly in the Eastern Region.

Among the persons assaulted are the Presiding Member of the Ga Central Municipal Assembly and an Assembly Member of Achiase District.

“The Association condemns in no uncertain terms the assault on such Honorable Members and any such intimidation or threats that may be directed at any Assembly Member for exercising their rights to confirming the MMDCE nominees”, a statement signed by General Secretary Kokro Amankwah said.

STOP ASSAULTING PRESIDING AND ASSEMBLY MEMBERS WHO HAVE EXERCISED THEIR RIGHTS DURING THE CONFIRMATION OF METROPOLITAN, MUNICIPAL AND DISTRICT CHIEF EXECUTIVES (MMDCEs) - NALAG

The attention of the National Association of Local Authorities of Ghana (NALAG) has been drawn to various degrees of assault on some honourable members during the confirmation of the Metropolitan, Municipal and District Chief Executives (MMDCEs) of Ga Central Municipal Assembly in the Greater Accra Region and Achiase District Assembly in the Eastern Region.

Among the assaulted persons include the Presiding Member of Ga Central Municipal Assembly and an Assembly Member of Achiase District.

The Association condemns in no uncertain terms the assault on such Honorable Members and any such intimidation or threats that may be directed at any Assembly Member for exercising their rights to confirming the MMDCE nominees.

The Local Government Act 2016, Act 936 Section 20 (1) stipulate that “There shall be a District Chief Executive for each district appointed by the President with the prior approval of not less than two-thirds majority of the members of the District Assembly present and voting at the meeting.” This enjoins Assembly Members to confirm the persons nominated by the President of the Republic of Ghana into the office of the Metropolitan, Municipal and District Chief Executive. This mandate is the sole decision of the Assembly Members and must not be influenced in any form or shape whether by threat, intimidation, assault or any such means that will interfere with the exercise of such right.

The Association has appealed to all Members in previous communications to as a matter of necessity confirm the MMDCE nominees to offset any such delays in implementing major decisions that may have arisen during the period which our Metropolitan, Municipal and District Assemblies (MMDAs) had Acting MMDCEs. However, we bemoan all forms of threats, harassments, humiliations and undue frustrations on our members and other public officers which frowns on their fundamental human rights.

Such acts are barbaric and must not be found among men of Honorable state as within our MMDAs.

We call on all authorities responsible for security and peace, particularly the police force in the country to rise to protect honourable members, and to arrest any such person who will be found culpable of threatening or assaulting public officers such as our Assembly Members. If we allow such to become the norm, it will foster division and cause a threat to our National Security.

A CALL FOR CALM

We urge all our members to remain calm and remain committed to the national development agenda for the good of the country whiles being cautious of their personal safety at all times.

We also call on our members to ensure that the whole process is not marred with any violence or unconstitutional activities which will affect the successes we have chalked under our democracy.

We still encourage our members to put all differences aside and let peace prevail before, during and after the confirmation of our MMDCEs.