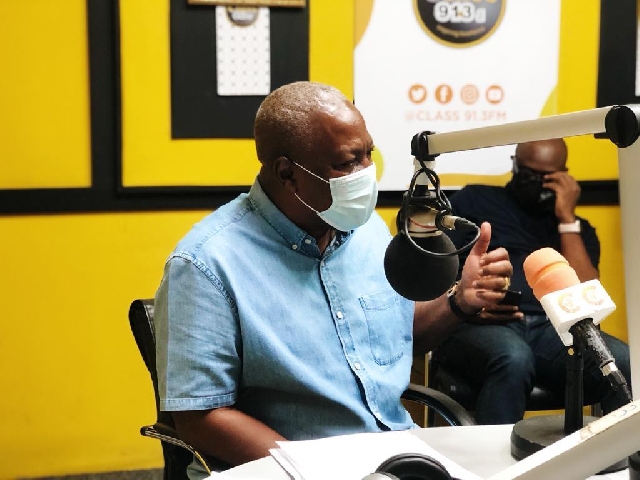 Speaking to Benjamin Akakpo in an exclusive interview on Class91.3FM’s Executive Breakfast Show on Monday, 14 September 2020, the flagbearer of the National Democratic Congress (NDC), said it was “sad” that President Akufo-Addo has decided to ignore his calls for a one-on-one debate on infrastructure.

According to Mr Mahama, now that both the governing New Patriotic Party and the NDC have launched their manifestos, it is even more imperative that they have such a debate.

“I do think that our people need to test our leaders on the clarity of their thought and how grounded they are in the proposals that they intend to roll out”, Mr Mahama said.

“But now, it goes beyond infrastructure; now, we have manifestoes; let’s talk about our policies and programmes.

“And, so, the people of Ghana would have been the beneficiaries of a debate between the two top contenders for leadership over the next four years and, unfortunately, they have declined”, Mr Mahama noted.

The former President also used the opportunity to deny claims that he also once run away from a similar challenge.

“…Let me correct an impression; they create an impression that I declined to debate in 2016. That’s not true. I was the first incumbent President to do a debate in 2012 with all my contenders, including Nana Akufo-Addo”, he recalled.

“And, so, in 2016, a debate was held and I participated with all the other presidential candidates but again, it is the opposition leader, Nana Addo, who declined to debate.

“The night after we finished debating, he was on Peace FM doing his own debate with himself and, so, I’ve never run away from a debate with Nana Addo. They should not create that impression”, Mr Mahama said.

Asked if he felt the President was running away, Mr Mahama said: “Of course”.

“And, so, I invite him again. I think he should ignore Sammi Awuku and all the others and just come out boldly and let’s talk about our track records.

“It’ll be for the benefit of Ghanaians. Ghanaians will have a clearer picture of who they want to vote for”, Mr Mahama added.

In 2016, Mr Mahama, while addressing NDC supporters in the Volta Region, said Mr Akufo-Addo, as an opposition candidate, made contentious claims about the incumbent administration, but was scared of debating him.

Mr Mahama, who was the incumbent at the time, took a jab at Mr Akufo-Addo after the latter had gone on Peace FM for an interview.

Mr Mahama said at the time that: “He [Mr Akufo-Addo] says so many things that are wrong. So, I said: ‘Come and sit down and let’s have a debate so that Ghanaians will know the truth’. He run away”.

“And that is the greatest disrespect you can show to the Ghanaian people”, Mr Mahama said at the time, pointing out that: “I am the President, I should be the one reluctant to come to the debate because all of them will be attacking you because they want your post. But I am the first sitting president to take part in a debate. In 2012, I did it, and this year, too, I engaged in the debate”.

“But the leader of the opposition is rather running away; which is very strange. Even Trump, with all his wild ideas, had the boldness to attend the debate. This morning, he Akufo-Addo] rather went on Peace FM and spoke slangs there. So, I said: ‘If you can speak slangs, then you should come to the debate and speak there’”.