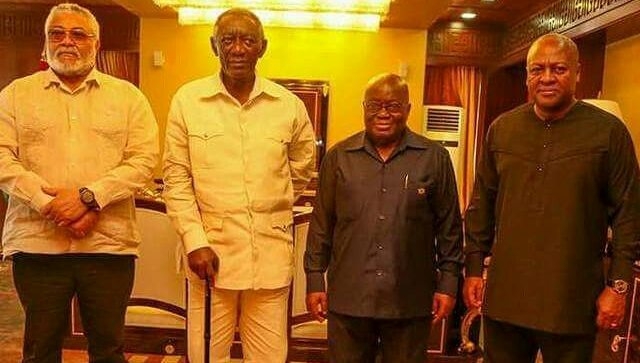 The National Democratic Congress (NDC) has accused President Nana Akufo-Addo of peddling falsehood against its flag bearer John Mahama in relation to the cancelled 17 December 2019 referendum.

The National Communication Officer of the NDC, Mr Sammy Gyamfi, has said that the President accused Mr Mahama of agreeing to the processes toward amending portions of the 1992 Constitution to allow party politics in the election of Metropolitan, Municipal and District Chief Executives (MMDCEs).

In a statement announcing the cancellation of the referendum on Sunday, 1 December 2019, Mr Akufo-Addo explained that on Tuesday, 18 April 2017, a little over four months into his mandate, he held a meeting with his three predecessors; Mr Jerry John Rawlings, John Agyekum Kufuor, and John Dramani Mahama at the Jubilee House to seek their views and counsel on these issues.

“I came away from that meeting with the view that there was a consensus amongst us that the time had come for political parties to participate openly in district assembly elections and local governance,” the President noted.

However, the President noted, the NDC made a U-turn, and stated that it was no longer prepared to go along with the national consensus.

But Mr Gyamfi, in a statement, said: “For the records, it’s a barefaced lie that President Mahama agreed to the amendment of Article 55(3) of the 1992 Constitution to allow for the introduction of partisanship in our local government system as alleged by President Akufo-Addo”.

For him, Mr Akufo-Addo rather “chickened out of the December 17 referendum for fear of defeat”.

He was of the view that if, indeed, Mr Akufo-Addo sincerely believes that ‘YES’ would have garnered the required 75% of the valid votes, “then why the cancellation of the referendum on grounds of lack of national consensus?”