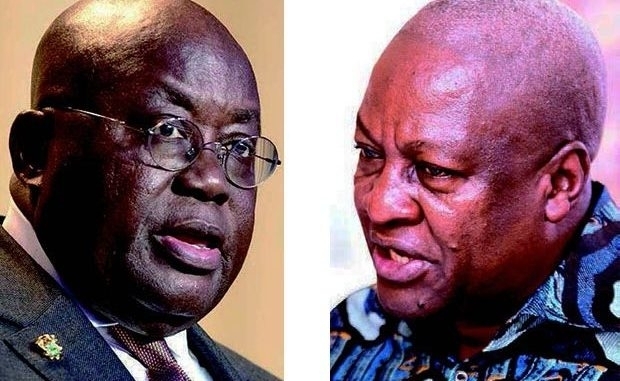 President Nana Akufo-Addo has packed Ghana’s courts with “so many” politically exposed judges who do not dispense justice fairly, former President John Mahama has complained.

“I just think that they [judges] should go by the oath of office that they take: that they shall dispense justice fairly to all manner of persons, and if they did that I’m sure that the image of our judiciary will rise in the eyes of the public”, Mr Mahama reiterated.

For instance, he observed, “There are complaints that are made against judges and you expect that action will be taken against those judges after investigations but you don’t hear anything; nothing happens and the judges continue to do what they want”.

Mr Mahama noted that President Akufo-Addo’s stuffing of the courts with political elements as judges is partly to blame for the bad image the public has about the judiciary.

“But part of the perception is also the packing of the courts by this president”, Mr Mahama noted.

“He’s appointed more judges in this history of this country than any other government: from the circuit, lower courts right up to the upper courts; he’s packed so many judges and most of them are political party [persons], I mean people who are openly exposed as political party operatives and, so, if you put people like that on, what do you expect”, he said.

Addressing a conference of lawyers of the opposition National Democratic Congress (NDC) on Sunday, 28 August 2022, Mr Mahama said the image of Ghana’s judiciary is “broken” under the leadership of Justice Anin-Yeboah, and hoped that a “new Chief Justice” leads an image-cleansing crusade in the future, since, in his view, the current Chief Justice cannot lead such a process.

At that conference, Mr Mahama bewailed that the judiciary has now become the butt of jokes, as a result of its biased rulings and decisions on cases with a political tinge.

In a veiled response, President Akufo-Addo called out Mr Mahama over what he described as the opposition leader’s “systematic” attacks on the Judiciary and Electoral Commission.

According to President Akufo-Addo, “Just as the government continues to implement policies to advance the rule of law, and, thereby, reinforce the confidence of the people, and shore up our nation’s reputation as a country governed by the rule of law, there are some who have made it their political agenda to disparage, systematically, the image of the Judiciary for selfish, parochial, partisan reasons.”

He stated: “These are the plaintiffs, who go to court, indeed, to the highest court of the land, provide not a single shred of evidence to back their claims, and, yet, insist that their claims be upheld, despite the elementary violation of the ancient, common-law rules for the discharge of the burden of proof that such a result would entail.”

The President continued: “It is no wonder that their claims were unanimously dismissed 7-0 by the apex court” – a reference to the apex court’s endorsement of the 2020 election result declared by the electoral commission that was challenged by Mr Mahama in court.

The electoral commission – party to the suit – said that President Nana Akufo-Addo of the National Patriotic Party (NPP) won 51.59% of the vote and Mr Mahama took 47.36%.

President Akufo-Addo said: “The result of this case is in stark contrast to the result of a similar one in 2013, when the unsuccessful plaintiffs managed to persuade four out of a nine-member court, to find for them, and, yet, the earlier plaintiffs chose not to wage a political war against the court.”

President Akufo-Addo made this known on Monday, 12 September 2022, when he delivered the keynote address at this year’s Bar Conference of the Ghana Bar Association.

He told Members of the Bar that Ghana is governed in accordance with the rule of law, and not on the basis of political considerations.

“It is important that all of us – especially us lawyers, who cherish the democracy we are building – say no to such persons, and guard jealously our democratic way of life, which we have done so much to bring into being. Independent judges, administering the law, protecting the human rights of citizens, and ensuring public accountability, are strong pillars of our democracy,” the President added.

Just as an independent Electoral Commission, noted for its efficiency and the transparency of its dealings, is one other such pillar, President Akufo-Addo noted that the Commission is, predictably, the object of the same anti-democratic attacks as the Judiciary.

“Mercifully for all of us, these attacks have not shaken the confidence of the people in these institutions. Genuine democrats should devote their energies to finding ways and means of strengthening the democratic institutions of our Republic, instead of expending profitless time in undermining them,” he stressed.