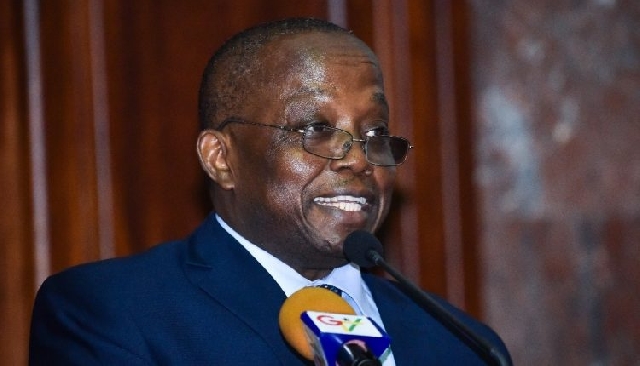 The Director of Policy Research at the Centre for Democratic Development (CDD-Ghana), Mr Kojo Asante has criticised the President’s decision to ask the Auditor-General, Mr Daniel Domelevo, to proceed on his accumulated annual leave.

At a press conference in Accra on Tuesday, 7 July 2020, Mr Asante described the development as disappointing on the part of the President.

Mr Asante, who spoke on behalf of the Civil Society Organisations (CSOs), said: "It is with sadness, disappointment and extreme concern that we come to you today to share our thoughts on the decision taken by the President last Monday, 29 June 2020, directing the Auditor-General, Mr Daniel Domelevo to take his alleged ‘accumulated leave’ of 123 days, beginning 1 July 2020”.

“Following the Auditor-General’s response to the President’s directive, his annual leave for 2020 has subsequently been added to his leave days; bringing the total leave days to 167. We find the entire episode and the justification for the President’s action regrettable and inconsistent with both the letter and spirit of the 1992 Constitution”, the CSOs said.

“In our estimation, such actions only weaken our quest for good democratic governance grounded in the principle of checks and balances, rule of law and the pursuit of public accountability. In the evening of Monday, 29 June 2020, news started filtering in that President Nana Addo Dankwa Akufo-Addo had directed the Auditor-General to take his alleged ‘accumulated leave’ of 123 days, effective 1 July 2020. The statement indicated that the basis of the President’s directive was Sections 20 (1) and 31 of the Labour Act, 2003 (Act 651)”.

“These provisions basically provide for a 15-day leave entitlement for a worker in a calendar year. Further, a worker or an employee cannot enter into any agreement to forgo a leave entitlement; such agreement would be void. Mr Domelevo was said to have taken 9 out of a possible 132 days since his appointment in 2016”.

"To apparently strengthen the justification for such an action, the statement referred to a similar decision taken by the late President Mills in 2009 during the tenure of Mr Edward Dua Agyeman (then-Auditor-General), now current Board Chair of the Ghana Audit Service. On the 3rd July 2020 the Auditor General responded to the President’s directive challenging the legal basis for the decision and expressing concern with what he considered to be an effort to interfere with his constitutional mandate. On the same day, the Presidency followed up with a reply restating and expanding its legal justifications”.

“All the 3 communication from the Presidency to the Auditor-General and vice versa have been shared with the public. Ladies and Gentlemen, context matters in discussing these issues. It is important to note that this current issue with the Auditor-General is not an isolated event but part of an ongoing tussle between the Auditor-General and the Audit Service Board led by its Chairman Mr Edward Dua Agyemang, over the confines of the Auditor General’s constitutional independence. The Board’s efforts to subjugate the Auditor General under its control has led to several clashes including a matter in 2017 over the purchase of vehicles for the Audit Service which is now a subject of an EOCO investigation”.

“There was an attempt to resolve the impasse through a Committee set up by the President and led by the President’s Secretary but it was unsuccessful. Mr Isaac Wilberforce Mensah has taken the constitutional matters raised by the Board to the Supreme Court for interpretation”.

“It is, therefore, no surprise that the Board Chairman is reported to have confirmed on several media platforms that it is the Board that referred the matter of the Auditor-General’s alleged ‘accumulated leave’ to the President. This context indicates that at the heart of the matter is the independence of the Auditor-General and that is what we should pay attention to”.