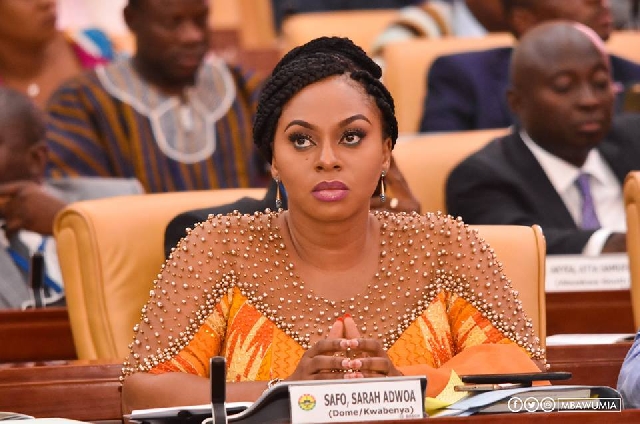 President Nana Akufo-Addo has terminated the appointment of Sarah Adwoa Safo as Minister of Gender, Child and Social Protection with immediate effect.

A statement from the presidency signed by Director of Communication Eugene Arhin on Thursday, 28 July 2022, said: “In accordance with article 81 (a) of the Constitution, the President of the Republic, Nana Addo Dankwa Akufo-Addo, has revoked the appointment of Hon. Sarah Adwoa Safo, MP for Dome Kwabenya, as Minister of Gender, Child and Social Protection with immediate effect”.

“The Minister of Sanitation and Water Resources, Madam Cecilia Abena Dapaah, will continue to act as caretaker minister of the Ministry of Gender, Child and Social Protection, until such a time that President Akufo-Addo appoints a substantive minister”.

The President's decision comes after Parliament’s Privileges Committee recommended that the seat of the Dome Kwabenya MP be declared vacant for her protracted absence from the chamber without permission from the Speaker.

The majority of members on the Committee are in favour of that decision against those who recommend otherwise.

Portions of the report read: “…The majority was of the view that Hon Sarah Adwoa Safo failed to take advantage of the numerous opportunities and facilities offered her to provide a reasonable explanation to the Committee with regard to her absence without leave”.

A few days ago, Ms Safo said the NPP cannot give up on anyone as every single person and vote is needed to enable the party to retain power.

She, therefore, urged the leadership of the party to work to maintain a united front so they break the eight-year power-swing jinx.

In a Facebook post on Sunday, 17 July 2022, congratulating the newly-elected national executives of the NPP, the Dome Kwabenya MP reiterated that despite the “clear political hounding and vendetta by certain elements within the party and parliament” against her, she has “never wavered in” her commitment to the ideals and creed of the NPP and the Akufo-Addo-led government.

According to the Dome Kwabenya MP, during her time as Deputy Majority Leader in Parliament and Leader of the Women’s Caucus, she, “together with the leadership of the Majority, did our very best to protect a colleague female Member of Parliament who had to be away in London for close to two years to take care of family issues”.

“We did this on compassionate grounds because it involved children and didn’t go round making hue and cry about her absence”.

“This is just one example of how we protected one of our own as leaders in parliament.”

She however noted: “In the last few months that I have been away from official duties albeit not intentionally, I have become a victim of a sustained political witch-hunt by certain elements in the NPP and in parliament to achieve their own parochial goals”.

“This has left me asking myself if this is happening because I am a woman, who, for just this one time, needed some time off to deal with a few personal issues which were too dear to share with the larger public.”

She continued: “As a party member, I have served with utmost diligence (both in opposition and in government) and have at all times put the fortunes of my family at the party's disposal.”

She added: “At no point in time have myself nor my family withheld anything of ours from our great party, yet today, I am conveniently being called a traitor and all manner of names with several schemes being put to play and employed to oust me from my position as MP and minister.”