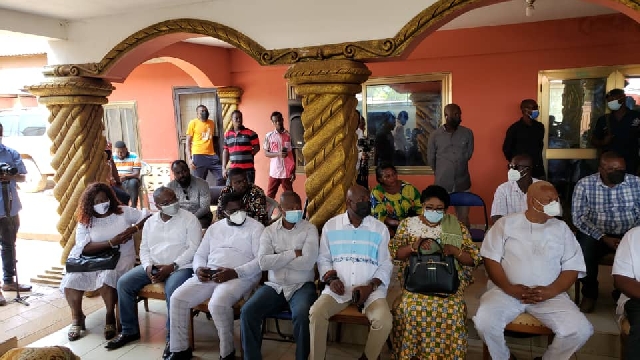 The 2020 Campaign Manager of the opposition National Democratic Congress (NDC), Prof Joshua Alabi, on Tuesday, 23 November 2021, paid a courtesy call on the Nungua Traditional Council in Accra to extend the biggest opposition party’s gratitude to the chiefs and people of Nungua and appreciate them for supporting the party.

Speaking at a meeting with members of the Nungua Traditional Council, Prof Alabi said he is of the firm conviction that the NDC and former President John Mahama won the 2020 elections but the party was robbed of a well-deserved victory through the machinations of the Electoral Commission and the state security apparatus.

He noted that he was impressed with the performance of the NDC, especially in the Greater Accra Region, where the party garnered the highest number of votes and increased the number of parliamentary seats from 13 in 2017 to 20 in 2021.

He also expressed his utmost desire to continue to work hard for the NDC in the run-up to the 2024 elections to return Mr Mahama to the presidency.

For his part, the Paramount Chief of the Nungua Traditional Area and Vice President of the Greater Accra Regional House of Chiefs, King Odaifio Welentsi III, admonished politicians to team up, forge partnerships and pursue common interests for the benefit of the state as opposed to creating an impression of division among the citizenry.

In a related development, Prof Alabi also visited the Gborbu Wolomo, Wor Lumo Nuumo Borketey Laweh Tsuru XXXIII, where he also thanked him (The Gborbu Wolomo) for his guidance and support before and during the 2020 general elections.