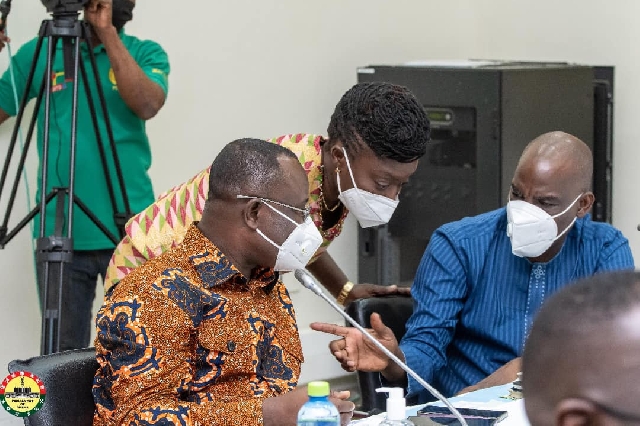 Parliament’s Appointments Committee vetting some Deputy Ministers of State-designates nominated by the President and submitted to Parliament to determine their suitability for the positions nominated, on Friday, June 4 vetted four more Deputy Minister designates.

The four took turns before the Committee chaired by First Deputy Speaker and the Member for Bekwai in Ashanti Region Hon. Joseph Osei-Owusu to answer questions on the roles they will play to assist in promoting good governance in the second term of President Nana Akufo-Addo.

Member of Parliament for Juaben Constituency in Ashanti Region Hon. Ama Pomaa Boateng pencilled for the Communications and Digitalisation Ministry who is one of the eight females nominated began the process, taking her turn before the Committee to be grilled.

In a vetting proceeding that lasted less than an hour, the Deputy Minister-designate had her Curriculum Vitae, her vision as well as plans for the Ministry thoroughly scrutinised by members of the Committee.

She was full of praise for both former President John Mahama and President Nana Akufo-Addo for their roles in bringing to fruition the country’s digitisation drive and culminating into the lofty heights and success chalked by the Communication Ministry and the economy as a whole.

The President’s nominee pledged her unalloyed support to the sector Minister Ursula Owusu Ekuful and promised to assist her achieve the Ministry’s laudable goals and visions.

MP for Trobu Constituency and Deputy Minister-Designate for Fisheries and Aquaculture Moses Anim the next to be quizzed obtained his first degree in BSc Biochemistry at the University of Ghana Legon in 1991 and in 2005, obtained an Executive MBA in Project Management at the University’s Business School.

He emphasized Government’s resolve to revitalise the aquaculture industry to increase domestic production, reduce fish imports and create additional job opportunities while stressing his ambition to empower fisher folks with the requisite knowledge on the aquaculture sub-sector and implementation of other key programmes.

The Trobu lawmaker pledged to support and assist the Minister in implementing the underpinning policy drive of the Ministry towards achieving the structural change in the Fisheries sector of the Ministry’s Aquaculture Development Programme.

According to him, the Ministry will use policy interventions and active private sector participation as a tool to promote freshwater fish farming and marine culture, thereby creating additional job opportunities, promoting aquaculture as an alternative source of domestic fish production through deliberate policy interventions.

Reacting to claims that officials in charge of selling the premix fuel sell it mostly to pro-NPP fishermen who hoard and sell the product at an inflated price thus creating shortage, he promised to assist the Minister sanitise the industry and continue processes aimed digitizing the distribution of premix fuel to address the confusion characterizing the distribution process.

He described as unacceptable the cumbersome procedures applicants go through in acquiring a Ghanaian passport in the country and promised to charge the Passport Office to improve on their services to enhance the turnaround time in passport acquisition.

The Deputy Minister-designate was particularly not enthused about the bureaucracies applicants have to go through to acquire their passports and noted further that the Ministry will do all in its power to make the necessary interventions to ensure efficiency at the Passport Office and also announcing that passport acquisition in the country has been decentralised.

Answering to claims that campaign contributions might have been generating an increasingly deleterious effect on the quality of Ghanaian diplomatic representation overseas who are mostly politicians instead of career diplomats, he said it was time to examine research about political versus career appointments.

He agreed to suggestions that empowering long-serving career officials ensures that the most experienced officials are influential in the policy process, incentivizes the development of expertise through a career in government service and added that the merit-based system improves performance of the bureaucracy by cultivating valuable expertise.

Nana Ama Dokua Asiamah-Adjei the MP for Akuapem North Constituency who served as the Deputy Minister for Information in President Nana Akufo Addo’s first administration and born on July 24, 1982 took turn to inform the Committee on how she will assist in the second administration of the President.

She holds a Bachelor's degree in Psychology from the University of Ghana and a Master's degree in Logistics and Supply Chain from Exeter University in the United Kingdom.

The nominee apologised profusely for her comments made with regards to (Odwanfunu) or dead goat post in April 2018 when she served as Deputy Minister for Information comments believed to be about the former President John Mahama administration’s and concurred that such comments should not be coming from a Deputy Minister of State.

In response to a member of the Committee who wanted to know if the Government may have One District-One-Market to formalise the informal sector particularly for the market operator, the nominee said there is a policy to house all issues of SMEs to coordinate their activities.

According to her, there are 232 1D1F projects, 76 are operational, 49 are to begin construction this year, while 107 are at various stages adding that Foreign Direct Investment (FDIs) will create job opportunities and propel Ghana to the desired industrialisation goal.