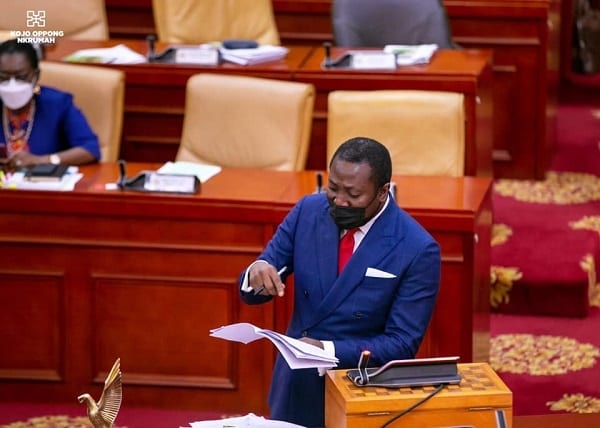 The Majority in parliament has described as irresponsible and disappointing, the reaction by the Minority caucus and the National Democratic Congress, to the Cape Coast High Court’s nullification of the Assin North parliamentary poll, which, consequently, ousts opposition MP Gyekye Quayson, from the chamber and paves the way for a by-election.

The Minority and the NDC, have both suggested in various comments after the court’s decision, that the judiciary was being used to whittle down the numbers of opposition MPs in parliament.

Minority Leader Haruna Iddrisu, in the course of the discussions, also said such eventualities would pose a threat to the cooperation between the two sides.

Deputy Majority Leader Alexander Afenyo-Markin, however, told the parliamentary press corps in an interview on Friday, 30 July 2021 that “the least we expect of them [Minority] is to be a bit responsible”.

He said: “I was surprised to hear Mr Haruna Iddrisu make a statement to the effect that cooperation will suffer”.

“What is the meaning of cooperation will suffer? That you’ll frustrate government business? That you’ll become an obstructionist because you’ve lost a case in court? That you’ll undermine the business of government in parliament?” the Effutu MP wondered.

He said: “I think that such words should not be coming from the minority that ‘cooperation will suffer’”, quizzing: “So, you go to court and lose, you come and obstruct government business?”

“The people of Ghana must know, therefore, that the agenda of the NDC is to make them suffer by frustrating government business”, Mr Afenyo-Marking argued.

He said the majority caucus in parliament, “takes this opportunity to express its disappointment in the affairs of the NDC minority in respect of the high court ruling in the matter of Assin North constituency”.

“We are disappointed because we expect the NDC minority, no matter how desperate they are for power, to wake up to the reality of the rule of law which is part of the governance of this country. For the avoidance of doubt, I may want to read article 125(1) and (3): ‘Justice emanates from the people and shall be administered in the name of the republic by the judiciary, which shall be independent and subject only to this Constitution’. (3): ‘The judicial power of Ghana shall be vested in the judiciary. Accordingly, neither the president nor parliament nor any organ or agency of the president or parliament shall have or be given the final judicial power’” he quoted.

In his view, the NDC minority has “gained notoriety for always coming out to scandalise the judiciary any time a ruling or judgment does not go in their favour”.

The lawmaker recalled that when the NDC took a similar action against an NPP MP in the past, the Danquah-Busia-Dombo party did not cry wolf as the current opposition is doing.

“There’s precedence in the matter that just occurred at the Cape Coast High Court. In that precedence, Hon. Adamu Sakande, who was the MP for Bawku Central, was asked whether or not at the time he was filing, he owed allegiance to any other country. His answer was: ‘He was in the process and that he had initiated the process of giving up his British citizenship’”.

“This matter travelled all the way to the Supreme Court and the court’s position was clear: That at the time he filled the form, he had still not given up the British citizenship. Accordingly, he was not qualified to be a candidate, let alone coming to occupy the chamber of parliament”.

“He was denied the opportunity, and not only that; the fact that he had lied on oath, bear in mind that the form we fill at the EC, you depose to an affidavit and because he misled the EC and that in itself was a criminal offence, the state prosecuted him and he was convicted and sentenced. He served a jail term. May his soul rest in peace”, Mr Afenyo-Markin said.

He then asked: “What is different from the Sakande case that the NDC is complaining [about]? You see, the same NDC would want to put up a legal challenge – when they win, they are happy; when they lose, they come home crying. That is unfair. You’ve gone to court, you contested the case, you’ve lost. This issue of somebody having dual citizenship and not giving up was started by the NDC. They made sure that this man was jailed …”

“The complainant did not only pursue the civil angle, he also pursued the criminal angle. He was a witness in court. Did we at the time say that the NDC was interfering in the judicial process or that the NDC is telling us that they interfere with judicial processes or that when they had power, that was what they were doing. Is that what they want to tell us? You see, we owe a duty to ourselves and this country to protect the peace”.

He said the bahaviour of the minority caucus and the NDC could threaten the peace of the country.

“When we do these things to escalate tension and mislead people into believing that our institutions are not working, all that we are calling for is chaos. All that we are calling for is lawlessness. And I believe that the minority NDC in parliament and its leadership, should not have come to scandalise the court. The least they could do was to respect the court decision”.

“Perhaps, the court has even been lenient. If the court had really wanted to pursue that matter, it would have taken a judicial notice and even convicted him for contempt of court. So, even when a court has been lenient, in spite of all the behaviour of the MP-elect in this matter, the minority still finds a platform to attack the government and for that matter, the NPP”.

“It is important to state that the effect of the NDC minority press conference, was to play to the gallery. They must be seen to be upholding and protecting mage of the judiciary and not to be scandalising the judiciary. Technically, the NDC is creating the impression that institutions must not have their independence to work.”