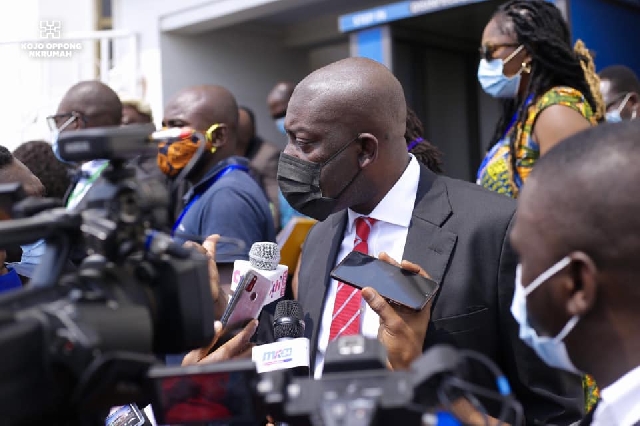 A spokesperson for President Nana Addo Dankwa Akufo-Addo’s legal team in the ongoing election petition, Mr Kojo Oppong Nkrumah, has said it is unfair to the judicial system for lawyers of former President John Mahama, the petitioner, to suggest that justices of the Supreme Court have a “predetermined agenda” to rule against their client.

Dr Dominic Ayine, a member of Mr Mahama’s legal team, after the Supreme Court, on Tuesday, 16 February 2021, ruled that Mr Mahama cannot reopen his case after closing it, for the sole purpose of subpoenaing the star witness of the Electoral Commission, Jean Mensa and using her as an "adverse" witness, told the media that the apex court was ‘wrong’ in its judgment.

The lawmaker then accused the court of reducing the five-subject case to a single issue.

According to the former Deputy Attorney General: "The Supreme Court asked itself a question, which we deem as a wrong question and answered that question. It said: why does the Chairperson need to account to the people of Ghana when she’s not a party to the suit".

"Now you’ll recall that counsel made it clear that one of the reasons we are in court is because of the unconstitutional conduct of Mrs Jean Adukwei Mensa as the returning officer under the Constitution and it is not true that there is only one issue that needs to be determined in this matter", the lawmaker said.

He continued: "I am surprised that the Supreme Court itself, having set down five key issues to be determined, is now reducing the issues to one, which is whether and extent to which the evidence that we have led, shows that no one got more than 50 per cent of the votes in accordance with article 53 of the Constitution".

"But we have made it abundantly clear in the petition that there were a number of infractions".

"We are contesting even the constitutionality of the declaration that was made. We are saying that she violated article 23 of the Constitution because she’s an administrative body".

"We have also said her exercise of discretion was contrary to article 296 of the Constitution".

"These are all germane issues under the Constitution and laws of Ghana and to reduce the petition into a single-issue petition, is rather unfortunate and smacks of a predetermined agenda to rule against the petitioner in this matter".

Reacting to this, Mr Nkrumah said: “It is not fair to the judicial system, it’s not fair to our democracy, it’s not fair to the people of Ghana that when you lose an application because it is not grounded in law or because you’ve failed to meet the legal standard, then you come here and literally poison the minds of the public and make claims that they may be having a predetermined agenda. That’s scandalous of the court”.

“The Supreme Court has not reduced the petition to a single issue. We tried our best to transcribe the ruling and we’re waiting for the written version of it. The court said that the major issue, it didn’t say there was a single issue before it…”

The Supreme Court’s ruling means the EC boss, who is the Commission’s witness, will not be in the dock for cross-examination as the petitioners wanted.

Mr Mahama is challenging the results of the 2020 election.

According to the former President, neither he nor President Akufo-Addo crossed the threshold of more than 50 per cent as prescribed by the Constitution to be declared winner of the polls.

He is praying the court to order a rerun of the polls between himself and Nana Akufo-Addo.