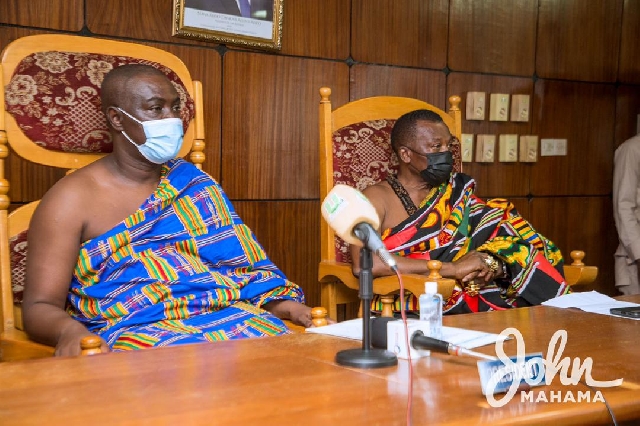 The President of the Bono Regional House of Chiefs, Ɔsagyefo Ɔseadeɛyɔ Agyemang Badu II, on Wednesday, 8 September 2021 condemned the militarisation of the 2020 general elections made an appeal to President Nana Akufo-Addo to urgently constitute an enquiry into the killing of innocent Ghanaians.

Ɔsagyefo Ɔseadeɛyɔ Agyemang Badu II, who is the Dormaahene, expressed surprise that such acts of impunity could occur in a democracy.

"I have witnessed elections in this country since 1979. There are sometimes disagreements but happenings in the 2020 elections was difficult to comprehend. It has always been normal in the past to witness the counting of ballots peacefully. So where from the conflict? Truly, it happened at many places and in the Bono East region about four or so people fell with many others suffering gunshot wounds," the chief bemoaned.

"Truly, even when the soldiers were ruling us and we were fearful, we never saw anything like this. So how come in 2020 at a time we are supposed to be progressing, people simply going to vote for someone to become President, could lose their lives," he wondered.

The Chief was speaking during a meeting with the 2020 presidential candidate of the National Democratic Congress (NDC), John Dramani Mahama, during his tour of the Bono Region to thank the chiefs and people for their support and votes.

He, therefore, appealed to President Akufo-Addo to "as a matter of urgency" institute a commission to deal lawfully with all perpetrators so that such an act will not be repeated in the 2024 elections.

Ɔsagyefo Ɔseadeɛyɔ Agyemang Badu II, while thanking President Akufo-Addo for the proposed Agenda 111 hospitals, entreated him to endeavor to complete abandoned hospitals for use by the beneficiary communities.

He also appealed to former President Mahama and the NDC to join hands with the Akufo-Addo government to resolve the unemployment situation which he described as a "time bomb" waiting to explode.

Former President John Mahama affirmed the readiness of the NDC, noting that he has already made the offer to the President that the NDC is ever ready to sit together and discuss solutions to the country’s challenges.