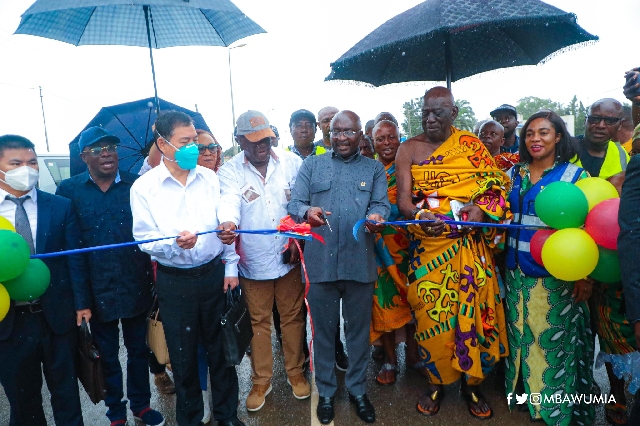 Bawumia cutting a ribbon to open a project

Speaking at the ceremony, Dr Bawumia noted that apart from the SinoHydro, Government is undertaking roadworks in every region of the country. In the Central Region, a number of road projects have been completed, he disclosed.

In addition, the DUR have re-gravelled 50km of roads and also undertaken the rehabilitation of 7.5km of roads.

The Department of Feeder Roads has also upgraded 75km of roads in the Central Region to bitumen surfacing and constructed six major bridges.

Also in the Central Region, the Vice President noted that there has been the construction of 105m span Steel Bridge on Suprudu-Ammissano- Mankessim Feeder Road, and the construction of 25m, 20m and 40m span steel bridges over rivers Akora, One, and Okyi respectively.