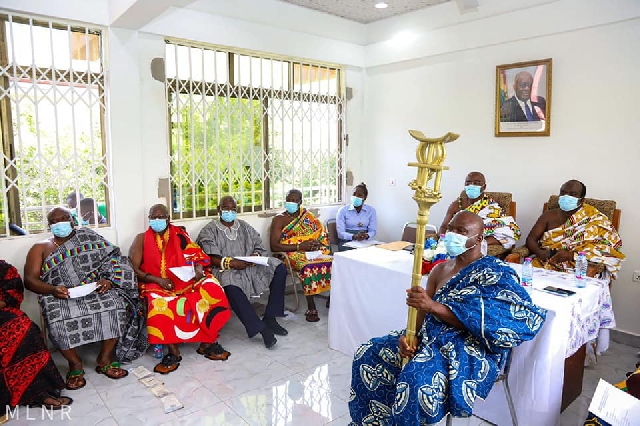 The Central Regional House of Chiefs has assured the government of their utmost support and commitment to protect the country's lands, forest and mining sectors.

The Chiefs said it is in their collective interest to ensure that future generations enjoy the benefits of clean water and an enhanced environment among others.

The President of the Central Regional House of Chiefs, Odeefuo Amoakwa Buabu VIII, gave the assurance when the Minister for Lands and Natural Resources, Samuel A. Jinapor met the House on Monday, 6th September, 2021 in Cape Coast on the first leg of his two-day two of the region.

Odeefuo Amoakwa Buabu VIII further stated that "we the chiefs of the Region recognise governments efforts at ensuring a sustainable land administration and management in the country through the New Land Act 2020".

The chiefs, he said, intend to organise a workshop to sensitise members on the Act to help enhance their contributions towards its implementation.

The Regional House of Chiefs President also commended the Minister for the honour and respect he accords to Chiefs and the chieftancy institution in general.

The 23-member Regional House of Chiefs were hopeful that issues tabled before the Minister including the involvement of Chiefs in the issuance of mining licences would be considered.

For his part, Mr Jinapor highlighted the role of Chiefs to the overall development of the country and commended them for their cooperation and support towards the government’s policies in reforming the lands and natural resources sector.

He further lauded the Chiefs for actively participating and ensuring the success of the Green Ghana project.

He called on Chiefs, District Police Commanders, other regional security chiefs and District Chief Executives to work in tandem to make the fight against illegal mining successful.

The Minister said the government is not against mining but was fighting the use of illegal methods and practices which deplete the environment and water bodies.