C’cil of State, parliament to work together to promote Ghana’s democracy 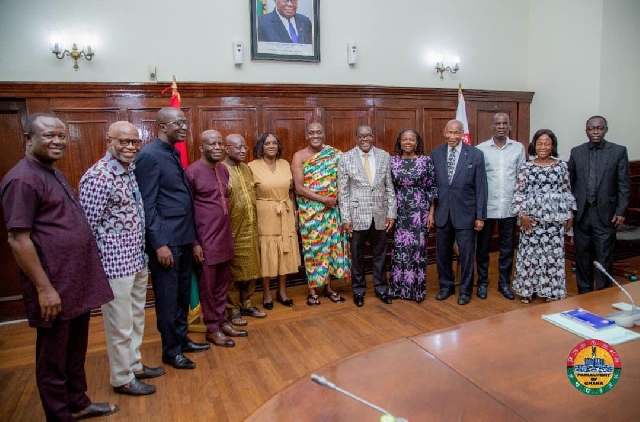 Council of State members with leadership of parliament

The Council of State has pledged to work closely with Parliament for the overall development of the country's democracy.

This came to light when some key members of the Council called on the Speaker of Parliament Alban Bagbin, his two deputies and the leadership of the House.

Key among the discussions were the constitutional provisions on the role of the Council of State in the legislative process and its interface with the President and the executive arm of government.

The Chairman of the Council Nana Otuo Siriboe II took the opportunity to call on Members of Parliament to be measured in their actions and utterances both on the floor of the House and in the public space, urging them to put the interest of the country ahead of any other interest at all times.

The Majority Leader, Mr Osei Kyei-Mensah-Bonsu, referring to members' actions on the floor, said heckling and filibustering are part of parliamentary practice but also said the leadership is working with members to project a more positive image of the membership and institution of parliament.

The Minority Leader Haruna Iddrisu pointed out a few lacunae in the law and sought to get the former Chief Justice Georgina Theodora Wood’s views on how to fill the gaps in the provisions in some of the country’s laws.

Speaker Bagbin spoke about his willingness to lead parliament to work closely with the Council of State in the legislative process and in other endeavours for the ultimate good of the country.

Speaker Bagbin spoke also about his views on a constitutional review and said it is time the country took a serious look at it.