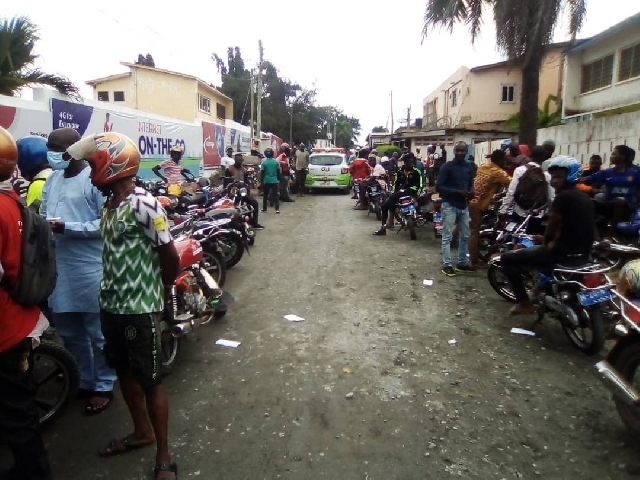 The Okada Riders Association of Ghana

The Okada Riders Association of Ghana is questioning why the governing New Patriotic Party (NPP) never considered legalising the activities of commercial motorbike operators until four months to the general elections.

This follows the government’s announcement that it will consult stakeholders to see the way forward on the legalisation of the operations of Okada riders in the country.

The main opposition National Democratic Congress (NDC), in its manifesto launched recently, promised to legalise the Okada business to ensure that it is safer for both riders and those who patronise their services.

Speaking to Class News on Monday, 14 September 2020 when the Okada Riders Association converged on the premises of Class Media Group (CMG) at Labone in Accra, where Mr Mahama was having an interview on Class91.3FM’s Executive Breakfast Show (EBS), the group described the NDC flagbearer as a messiah of all road users.

A member of the group said: “All road users, their Messiah now is JM because the mess on the road will continue until somebody in leadership takes a bold decision to bring proactive measures or bring pragmatic measures to reduce or stop the carnage on the road”.

“That is exactly what JM said he’ll do.

“We have given his colleague politicians or flagbearers time to come out and tell us what they can do.

“They have rather decided to stay in their comfort zone and rubbish what we’re doing”, he said.

He added that most Okada riders are graduates, who will play a vital role in ensuring that the legalisation of the Okada business is safe.

“This issue is about saving lives of passengers and road users on the road. The corrupt guys in Ghana who don’t have any integrity when it comes to this issue, they’re still speaking otherwise, but the great guys who have integrity, they’re speaking for regularisation.”

He added that: “You [NPP] cannot come to power for almost four years, you’re left with three months, even less than three months to leave the place and you’re now doing consultation, we don’t wash our faces upwards.”

The Ministry of Transport said it will hold final consultations on the legalisaiton of the Okada business in October this year after which a report will be forwarded to Cabinet for consideration.

“The 2nd phase of the consultations is to engage stakeholders in the six (6) newly-created regions of Bono East, Ahafo, Western North, Savannah, North East and Oti Regions.

“Other key interest groups and civil society organisations would also be consulted”, the ministry announced in a statement, adding that they include the following:

i. Center for Democratic Development (CDD)

It said: “Due to the COVID-19 pandemic, the final stage of the stakeholder engagement is expected to commence in October 2020, and a report presented before Cabinet for consideration”.

Ahead of the press statement, the sector minister, Akwasi Ofori Asiamah, had told journalists that the Akufo-Addo government has been holding consultations with the relevant stakeholders on whether or not to legalise the use of motorbikes for commercial purposes (Okada) since 2019 and if there is the need for the law to be reviewed, it will be done.